i celebrated my birthday at a cosy burger joint, boasting the 'world's greatest hamburger.' fancy fuddruckers for festivity? 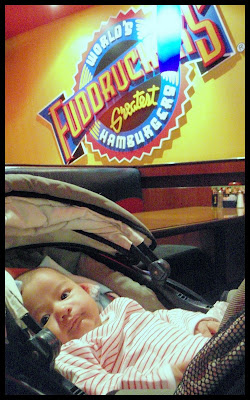 ini kazim
it's thursday night, on my birthday. mr. khairul wasn't feeling well, eventhough he planned to dine in fine at a special japanese-italian fusion place, and tomorrow's his day off. instead, i said let's just hang closer to home so that he didn't need to drive far, because it's really just 5 minutes away.

besides - fusion? fine dining? just one squiggly little food thingy on a big huge plate? us with 3 kids? thanks, but no thanks, honey. i wanted to eat, and eat a lot. i wanted a nice, big, fat juicy burger for my birthday, so we chose 'fuddruckers'!

fuddruckers is an american fast casual, franchised, restaurant chain that specializes in hamburgers. it was founded in 1979 in texas. ~wikipedia

think a little bit of 'chillis' and more of 'TGIF', you'll have an idea what 'fuddruckers' is all about. what sets it apart is probably the salad bar where you can add additional toppings to your burger - like salad and sauces, from jalepenos, salsa, tomatoes, to coleslaw. squirt some BBQ sauce, mayo, tomato ketchup, mustard, or a drop of tabasco for that zingy finish. there's even cheese sauce! 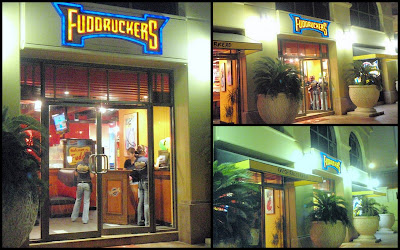 fuddruckers branch @ JBR
we went to the one in JBR (jumeirah beach residence) just opposite our place. it's on the first floor, on the boutique side of JBR, near a pedestrian bridge.

if it's winter, we would've walked right to JBR. however it's summer. so it's just suicidal to walk in this weather!

if you want to park, there's a small lot right by the pedestrian bridge, which will take you straight to a lift up to the bridge, cross it, turn right and you'll see the 'tchetche' cafe, and fuddruckers right next to it, at the end. 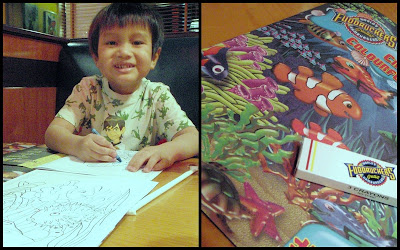 i was too excited (and hungry) that i didn't take any pictures of the interior, but i remember a lot of yellow, red, a splash of blue with tons of wood. bright, sun-shiny and cheerful family-friendly place.

the waitresses were filipinos, so you can expect good friendly service with a smile, as they're well-known for. khaleef and kahfi were immediately given coloring 'books' and little crayon boxes to keep them occupied. 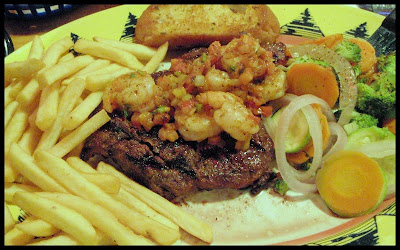 my shrimp and steak
ok, eventhough people come to fuddruckers for the 'world's best hamburger', mr. khairul insisted i have steak - because i'm the pampered birthday girl!

so i got myself the 'shrimp and steak' - a quirky combo indeed - meat and seafood. it's served together with steamed vegetables, fat fries and garlic bread.

the shrimp soft; sauteed with capsicum, tomatoes, herbs and spices. the steak, juicy and tender as expected. the sauteed bits placed upon the steak gave it a rare mexican-american taste - rare to me, since the steak i'm used to is usually served with brown sauce or sauteed mushroom.

i'm happy to report that the 'rare taste' turned out to an excellent change! 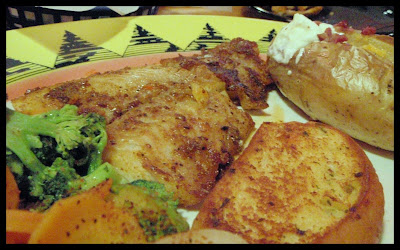 his verdict : it was a good meal, except for the questionable cheese sauce on the baked potato. hmm.

the steamed vegetable, both on mine and his were delicious - cut-up carrots, cucumber and brocolli - fresh, sweet and salty to complement the main dish. 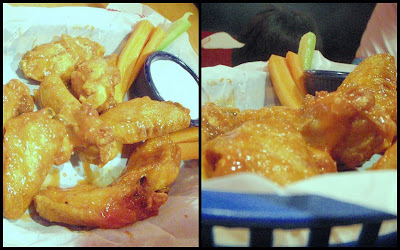 mr. khairul also ordered his must-have hot chicken wings. i don't fancy the bbq sauce enveloping the wings, so i tried one, and let mr. khairul finish the rest.

oh, and drinks are bottomless, yay! at first i thought there's no refill because my peach iced tea was served in a super huge glass! in fact, we ended up without having a refill!

(just look at kahfi drinking from the glass!) 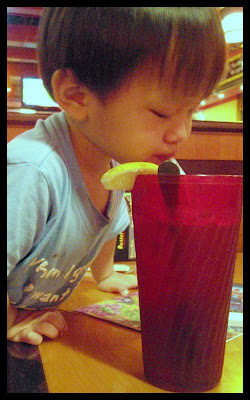 the kids meal can be ordered from the 'coloring book' given to the boys earlier, so we got khaleef the hotdog meal, which he shared with kahfi - monster hotdog, served on hot steamy bun, with fries on the side. a can of orange juice was included as well.

check out khaleef's expression when his bapak tried to inconspicuously 'pau' his hotdog... 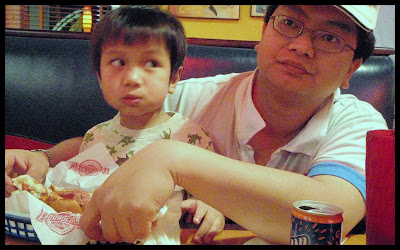 it was a simple birthday dinner, but as a 31 year old mom of a feisty kid, a terrible-two toddler and a baby, along with a not-feeling-well pillow partner - a quiet, cosy family place that's close to home was just what we needed. 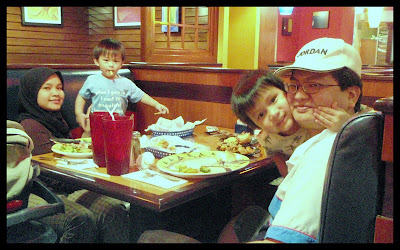 ..so thank you, honey for another memorable birthday treat. BIG hug to you!

HI, im working at Fudds JBR and its a great pleasure that you eat and dine at our restaurant.. I hope you'll visit us always :)

>> hi larskie 07! :) thanks for dropping a comment! service was warm & friendly and food was good so i'll definitely come again :)