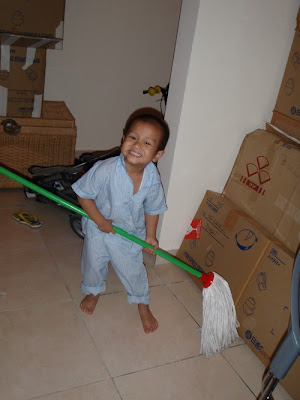 once upon a time, in Dubai Marina, neighbour to the land of Kay, lived a poor boy named Sindebola who lived with his stepmother and two step-brothers. he was called Sindebola as he well, obviously - no, it's not what you're thinking - not because of his love for bola, and no, not because his head is shaped like one - it's because his mother had him when his dad went to see AC Milan vs Hamburg.

anyway, it was a sad life for poor Sindebola, for he was forced to do so many house chores. even during his favorite cartoon, ben10. 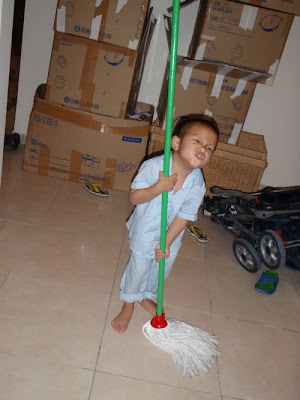 when they were not looking, he would make funny faces to jeer his stepmother and stepbrothers. nyeh nyeh nyeh. bleh. bluwek. pbbhhtt! - among others. and another one that we could not publish here. this posting is rated U - sesuai untuk tontonan seisi keluarga. 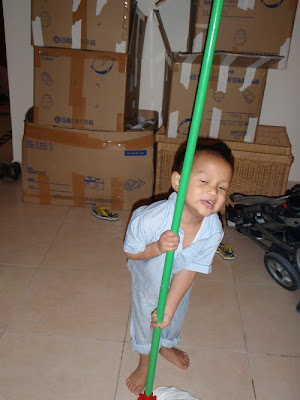 day in, day out, he was ordered to make breakfast (burnt toast and sneeze muffin), wash the dishes (2 plates, 3 cups and one glass broken), water the plants (time untuk main air) and feed the cat (with stepmother's pet goldfish). however his stepmother's favorite chore for him was mopping the floor. it was always mop this mop that. "mop the kitchen, sindebola. mop the hall, sindebola. mop my head, sindebola." it was a busy day, everyday. he was made to work even when he's sleepy. sometimes, even when he is sleeping - he had learned sleepwalking! 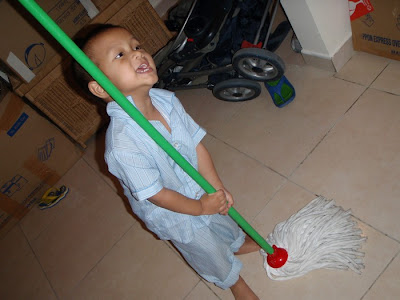 to pass the time and curi tulang, he enjoyed singing his favorite song, ketulusan hati by his real mother's favorite singer, anuar zain. he would sing his heart out until someone threw banana peel and shawarma wrapper across the lawn and shout, "oii bising!" he did not care. lantak engkau, he would say. kepala hotak engkau, they would reply. and yet, his heart will go on. 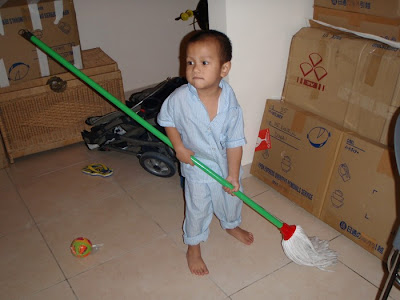 on quiet days, he dreamed about being rescued by a princess in shining armour. a beautiful princess that looks as sweet as miss strawberry shortcake, and as hot as that chick from high school musical, who would swoop him off his feet, kick ass and likes ben10 - they would ride together on a magic mop (what do you expect from someone who spends all his day doing nothing but mop the floor?) towards the horizon, and lived happily ever after.

he is still waiting. with his mop.

p/s: many thanks to syayang mak, khaleef for the pose. he's pictured here moping the floor of our new home in dubai marina.
Posted by Syigim at 8:24 PM

mabruk, mabruk for the new place...