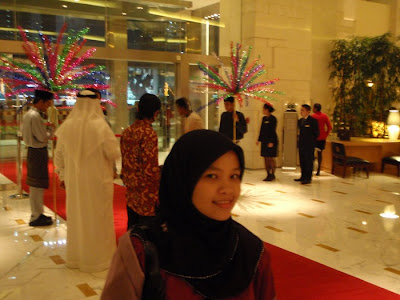 arriving at shangri-la dubai
much has been said about the 5th malaysia prime minister, datuk seri abdullah ahmad badawi. and sad to say, most of what's out there is in the negative.

so why was i excited to attend this dinner with the 5th PM?


hey, i'm a fan of dr. m but when i saw anwar ibrahim at a wedding one time, i was pretty psyched up too - you know what i mean? 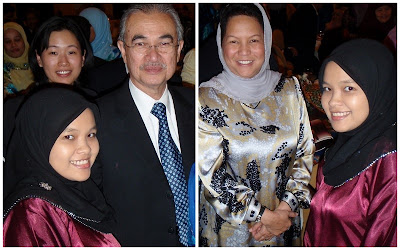 pak lah & datin seri jeanne so excited to take pict with me! ;)
datuk seri abdullah ahmad badawi or fondly known as pak lah was in uae for a 2-day official visit. definitely incomplete without a mesra-bersama-rakyat night, hence the dinner.

venue
held at shangri-la hotel, dubai - i was hoping atlantis or burj al-arab!

food
there was yummy nasi lemak! and the fried meehon was nice too. lauks include daging rendang, gulai nangka and the only one i took - ayam panggang berempah. for delicious sweets i took choc and cheese cakes plus slices of honey dew and strawberry. sigh! 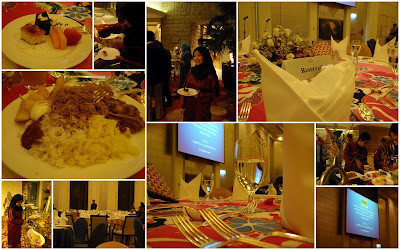 
she was just the sweetest, so pretty and radiant. and so warm and approachable. and i even had a brief chat with her.

"no matter how far you've travelled, nothing is like home (malaysia)." datin seri said.

trying to be cute i said, "yes, i can't even find a good char kuey teow here...i've tried so many places.."

"then you learn how to make one.." alamak, kena balik! "..you go back you duduk mana? kat malaysia? where are you from?"

"kat ipoh? ipoh is the best place to get char kuey teow...should be easy for you to learn.."

and that was it. we laughed together in that brief, peaceful moment - away from the ugly stories of her husband and all political crap. it was just about that night. the night i met the prime minister of malaysia and his wife.

and it felt great.

well, like i told mr. khairul - one day when i'm a grandma, i will take out my pandora box of junks and historic memorabilia - take out two photographs - the one with my fav PM, and the one with pak lah. i can tell my grandchildren,

"this is wan (what i want my grandkids to call me) with 2 PMs that made history.."

i bet most of my cucu would immediately recognize the first one.

"this is wan with him during one UMNO general assembly. this one when he came to UIA where wan did my degree. and here's us at a buka puasa do with uni students in putrajaya. he is the greatest malaysian prime minister of all time. he's the reason we're on the map. and he was PM for 22 years, the longest anyone ever served as PM!"

and i will see my grandchildren's faces beamed in awe of their cool grandma.

"..and here is another historic PM. he was PM in the shortest while. and i met him while i was staying in dubai with atuk. he was very friendly. warm smile."

lupa nak bgtau u or my fren tat u were there! he's pak lah's 2nd PA.

tsk tsk tsk..hani...hani...as if you dont know me already? with or without 'org dlm' sure i can catch a few shots with PM! hihih...