presenting another collection of 'junk from the past' - my postcards collection. almost a thousand of 'em. 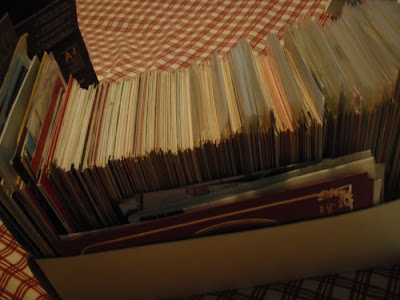 i keep my postcards in a shoebox
postcards i keep

hey, a lot of people collect postcards. especially when they're free, cheap and easy to store. furthermore it's the best, easiest way to get a picture of a travel destination, with a lil bit of info on the back. as a bonus, you can even send it to someone! or be at the other end!

i mean, really! do you know that instead of switching on your notebook, goin online, logging on to your email account, type a message and THEN click send - you can ALSO send a message by actually grabbing a pen and a postcard, write your message, paste a stamp on the right upper side and THEN put it in the nearest post box? neat, huh?

we're so hooked up on the net now that we forget the little charm of receiving a solid crisp of paper in your hand and being able to keep it under your pillow and read it anytime you want, even when there's a blackout? (unless you don't have a candle. or a torchlight.) 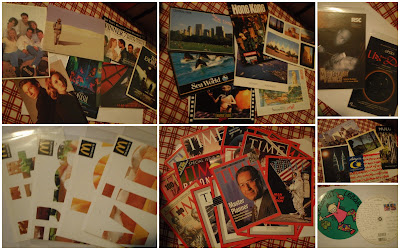 fav types of postcards i keep

also not forgetting the ones with crazy sexy cool caption or a creative social message like this sarcastic one on 'how to make your own ecstacy.' 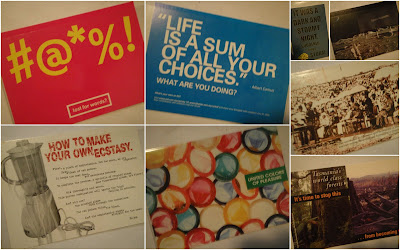 of course there are the priceless ones that i got from friends and family. especially coming all the way from a place beyond mountains and sea, with a foreign stamp on it. most precious in my keeping is one from my abah when he just arrived in san francisco, dated 1983! others are the ones i received from yong during her purdue days because her postcards always had these cute stamps on them.

*image removed*
classic 1983 postcard from abah and few from yong while studying in usa
saving the best for last, these postcards have a different value to me - inscribed upon the postcards are not messages from friends nor family - but from my idols! 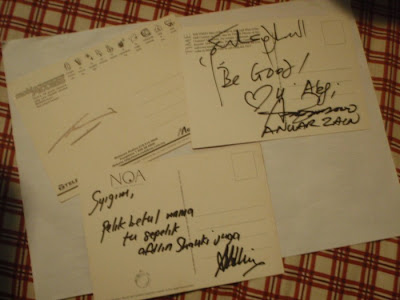 anuar zain, afdlin shauki and most classy autograph of all from msia's best PM
so, can't you guys take a hint? send me one postcard-lah!
Posted by Syigim at 10:26 AM