like me, my eldest son khaleef love to have his picture taken, and love to take pictures. when he gets hold of either my yellow olympus or his bapak's canon, he'll snap away - anything from what's on tv, the pillow or the insides of his mouth.

click here to see some of his earlier works! 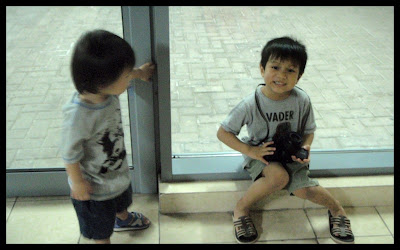 on our way to a makan place or the mall, he'll be holding on to the camera - ready to snap at anything interesting - under bapak's strict supervision.

mr. khairul wants khaleef to have a focus - an actual object before taking any shots. so for example when khaleef spots a nice flower bed, he'll ask his son to wait, and gives the cue to snap when the car stops at a traffic light junction. 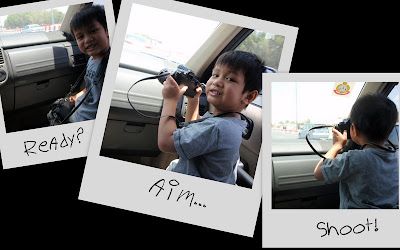 khaleef in action
flowers, birds and buildings - yes. but khaleef's favorite shot while on the road are fast cars. in dubai, it's easy to spot a ferrari and its adik beradik on the road.

when we went out the other day, khaleef spotted an orange car, and it was a lamborghini. like ferrari, it's one of those sleek type of cars that has become symbols of wealth.

the lamborghini story is interesting because this italian guy - ferruccio lamborghini is already rich from his tractor business, and owns a lot of expensive cars from ferrari to maserati. since he has this passion for fast cars, he decided to come up with his own!

while ferrari's emblem has the horse, lamborghini chose the fighting bull on his emblem. personally, i prefer ferrari - a yellow one! 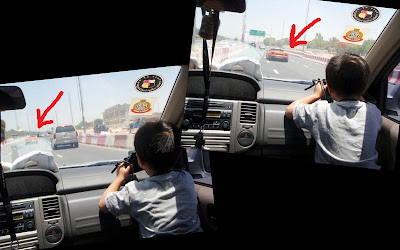 "bapak, hurry up!" as the lamborghini sped between traffic. and when the timing and distance were right - snap! snap! 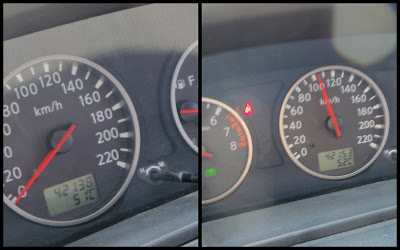 dubai is a hot zone now. 51 degree when we went out, which turned 52 soon after - and it's still may! bahang! around june last year, it did go up to 53 - click here for evidence!

Khaleef...come on lah...kasi tutorial on how to be photo-friendly sikit....:))

Great effort Khaleef! Please put on the seatbelt next time though. Lots of idiots on road.

>> ica, why auni xsukaaaaa...waste of a cute face lah haha..

dubai is p a n a s. period. bahang is the perfect word to describe it!