hey it's about mr. khairul's travels again. i didn't want my blog to start sounding like a totally travel-blog, that's why ade iklan sikit before i continue the stories from his damascus trip, to amman, jordan.

i can't believe it. it's the cave mentioned in the quranic surah al-kahfi - incidentally the surah which inspired my 2nd boy's name - kahfi. 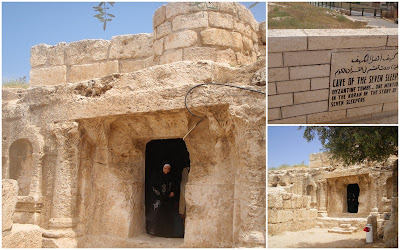 gua yang disebut dalam surah al-Kahfi
mr. khairul said he was not allowed to take pictures of the insides of the cave, but described it to be not too big, with low ceiling, and there are a few tombs which is said to contain the bones of the ashabul kahfi!

click here to read my take on the story behind picking the name kahfi, as well as the many benefits of reciting the surah.

also, here's an entry by my abu dhabi bloggirl azma, during her trip to jordan. a more in-depth writing on the story of ashabul kahfi or 'youths of the cave'. click here.

* * *
mr. khairul claimed that he had always dreamed of going to the 'dead sea' since he was 7, reading all those encyclopedia and national geography mags.

and last week he got to live that dream! 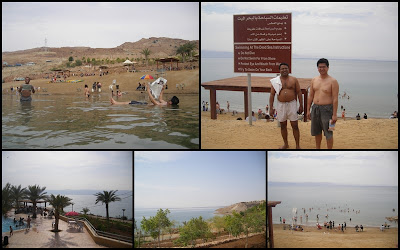 the dead sea, and its surrounding. ade pool kat atas for those (like kids) yang taknak mandi laut
wow. the dead sea. one of the most spectacular sites in the whole world, it's also the lowest point on earth, and has the world's richest source of natural salts.

the content of salts and minerals are so extremely high, that not a single creature can survive underwater - hence the name - dead sea. ironically, the sea-water is well-known to have therapeutic qualities. berendam dalam laut mati, boleh jadi penawar sakit-sakit kulit!

it can also ease pains from arthritis, rheumatism, psoriasis, eczema, headache and foot-ache, while softening the skin! mr. khairul did bring home bath salts, a few skin-care product made from the dead-sea minerals and even a 'dead sea body mud'! 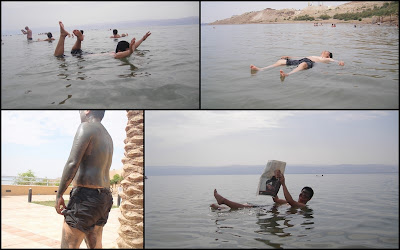 mr. khairul dengan macam-macam gaya terapung
can you see the 'orang minyak' in the picture? yeap. that's mr. khairul all covered in dead sea body mud! he lathered it all over his body, left it to set for a few minutes, and then dipped himself in the dead sea to rinse it away.

the best part of all of course - you can never sink in the dead sea. you float, and float, and float - regardless being over 80kg! (ops, honey!) lawak tengok gamba dia terapung sambil baca paper!

* * *
i only know petra from 'the indiana jones and the last crusade' movie. how ignorant i was! aside from being one of unesco's great historical site, it's in fact a vast 'city' of the nabataean race - arab people who settled in jordan more than 2000 years ago!

that's why i was so amazed when mr. khairul told me he went here! 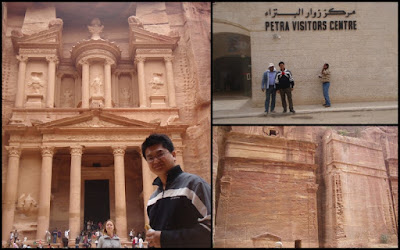 mr. khairul taking pictures in front of 'the treasury'
the 'city' is made of giant red mountains where buildings, rooms, and even water system is carved along the city right at the bottom of the rock mountains. the sight of these 'buildings' carved right into the walls are breathtaking.

mr. khairul said you have got to see it for yourself to be amazed by the outstanding ancient architecture!

'the treasury' is the part featured in the indiana jones movie. it's extremely gorgeous, more than words can say. all you can imagine is how amazingly intricate the carvings upon the orangey-dusty rocks. it's huge, high up and imposing.

it's made to be a tomb for a great nabataean king, but was re-named 'the treasury' when some people believed there are treasure hidden somewhere in the statues. 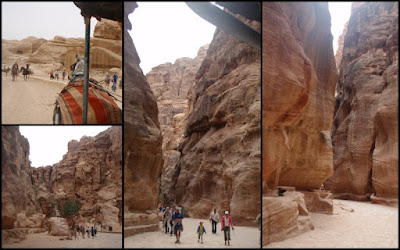 the entrance to 'kota petra' - called the 'siq'
the 'entrance' to the city is through the 'siq', a narrow gorge - jalan yang sempit in between high cliffs that soared up high. you can walk, or like mr. khairul, you can take the donkey down to the 'treasury' - the first part of the whole 'city'.

'petra' is really, really luas. this 'treasury' part is just a very small bit of the whole petra city. some say it takes 5 days to really go all around and see everything. so i told mr. khairul, bila budak-budak ni dah besar, we go duorang je honeymoon to jordan and just backpack across 'petra'. god willing!

* * *
wadi rum is a 'valley cut into the sandstone and granite rocks'. it's all desert sand, rocky hills as far as the eyes can see. a desert area so breathtaking - beautiful shapely rock mountains across the endless sand.

it has been the setting for movies such as 'lawrence of arabia', 'red planet' and even the latest 'transformer' movie! 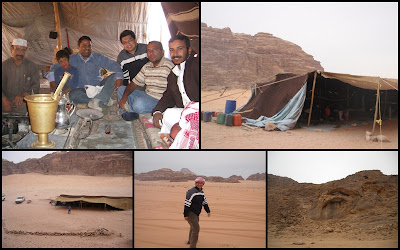 the bedouin camp
mr. khairul was so lucky as he got a chance to experience desert life of the *bedouin culture. he actually stopped at one campsite, where a bedouin man lives with his 2nd wife (who just gave birth!) and his other 2 kids!

there he was given warm welcome, served traditional bedouin tea made from weird looking herbs and leaves and even tried the arab bread made from scratch and 'baked' right inside the camp. 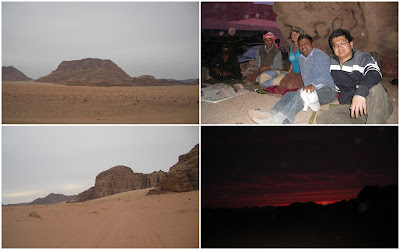 they spent the late evenings there, and caught the sunset. it fell behind the rocky hills, painting the sky a pinkish-peach. absolutely gorgeous. watching the sun sets against the horizon of a vast endless sea of sand - what could be more glorious?

* * *
mr. khairul also visited this waterfall in a place called ma'in. the interesting bit was - it's a super-hot waterfall. the place is actually a hot springs! 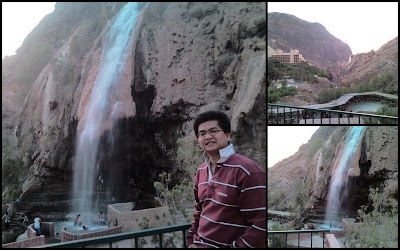 "the huge waterfall, heated by uderground lava fissures, fills many baths below. underneath the waterfall is a cavern where water trickels out of a hole. this water is HOT."

yes, there's actually a space behind the waterfall, where you can hang out just like when you lepak at a sauna. with steams coming out from the hot waterfall, you'd feel fresh and all-steamed up once you go out!

* * *
like damascus, i also see jordan as having its own unique characteristics - especially looking at all the square little houses that enveloped the '7 jabel' - or 7 hills that surround amman, jordan.

i mean really, just look at the picture below - the one where mr. khairul stood in front of the thousand-year old 'roman theater'. look at the little square houses behind it. you don't see that in dubai! 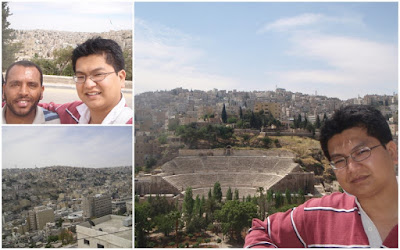 mr. khairul took pictures with ziyad, his designated driver in jordan
these square houses were even built on steep slopes and at the edge of hills! mr. khairul said, even as you pass by a rocky hill across the highway, you might catch a door and window or two - carved out from the rocks. and people actually live there.

amazing.
* * *
soon, mr. khairul will make his second trip to these neighbouring countries again - starting from beirut, lebanon, then back to damascus, syria, and finally amman, jordan once more.

sigh. bring back goodies for me and the boys ya? on the other hand, forget the goodies. just come home safe!

p/s: just kidding about the no-goodies. i want a big box of ferrero rocher at the very least!

helllowww teh, next winter break your destination is DUBAI. bole jadi babysitter so that kak syigim n along bole gi dating *wink wink*