i have always been a fan of the unexplained. paranormal. ghosts and goblins. the weird and wonderful. so it's no surprise that i'm an x-files maniac. for those who had been on another planet for the past 10 years of the show's golden years and don't know what it's about, check out my entry on the x-files.

and when another show comes along heavily compared to my fav show, i can't help but be intrigued. mr. khairul first saw it and was immediately hooked. besides, he was more excited to tell me about it coz he knows what i like. 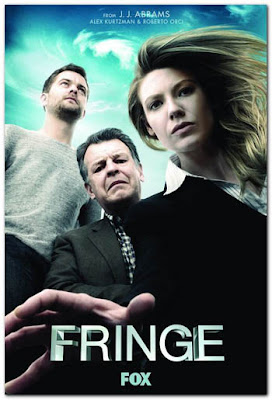 brought to you by the same man who did 'lost', 'fringe' is about an FBI special agent olivia dunham, who seek the help of mad scientist walter bishop, and his son peter as they investigate aspects of *fringe science (such as telepathy, psychokinesis, reanimation, and teleportation to name a few).

*fringe science is sort off a branch of science which defies the mainstream or orthodox theories. it's highly speculative, widely refuted and lack plausibility. rarely recognized by the science community.
~paraphrased from wikipedia

what do i think? it's unfair to make any judgements now coz the show is new, i've only seen a few episodes AND i am very biased plus sceptical as i watched the show. ("eish ni dah merepek" or "dia ni saje je nak sound sceptical to everything" or "eleh nk buat sexual tension mcm mulder and scully") cammon, this show is trying to please an x-files fan! it has got to really be as good if not better!

since i don't have anything better to do at the time being (read: takde keja) i happily did a list:

- agent dunham started a 'quest' after finding out her dead bf (also FBI agent) was a traitor and involved in something really wrong, while agent mulder started plunging into the x-filed cases as he believed that his sister was abducted by aliens

- agent olivia seek help from a mad scientist, a specialist in 'fringe science' but agent mulder relies on his knowledge and his partner's medical expertise

- agent olivia's sceptical 'partner' is peter bishop, son of the mad scientist - while agent mulder's sceptical side is his partner, agent scully

- fringe's tagline is 'ask. imagine. investigate.' - x-files' tagline is 'the truth is out there'

well, i miss the x-files and i love the unexplained phenomena. or in this case fringe science, a term i'm hearing for the first time. so, i'm staying glued to the couch for this one! check out the promo trailer...