i was bored halfway through. but the boys looked like they ain't leaving soon. looking at them sprawling like well-fed pythons on the al-tawasol carpet, sipping turkish tea, chattering away on batch news and laughing silly on jambu jokes - you'd never knew that some of them were meeting for the first time.

for the uninitiated, koleq is the nickname for mckk - the malay college kuala kangsar, boasting some of the most influential name ("ape 'some' pulak! many!" mr. khairul 'corrected' me.) >eyes rolling<, i obliged. my abah went to this school for his whole secondary school years. batch '65. never knew he would get a menantu from batch '96! 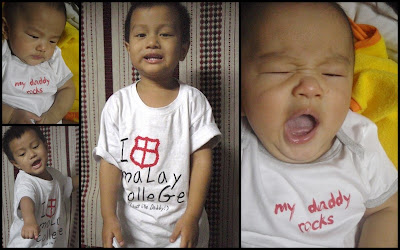 khaleef, modeling the "i love malay college (just like daddy) t's. kahfi is bored
for the mckk students, past and present, it was the old boys' weekend (OBW) once more, back home in malaysia. initiatives were taken and the mckk boys in dubai had their own OBW at our favorite mandy restaurant, al-tawasol.

according to mr. khairul, (quote unquote) "OBW is a time to meet long-lost friends, to make stupid jokes and laze around.." he then described how OBW is a time to mingle with successful old boys who inspire the younger koleq generation. also, this is the time you can hear the thundering ducatis and the flashy maserati parked in front of the legendary big school, driven by those who have made it far.

during these 2-day OBW, there are no datuks and tan sris. just call them abang or uncle, for that's the spirit of brotherhood displayed during this celebrated weekend. 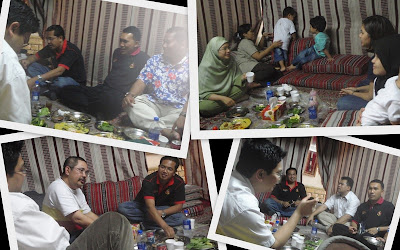 it's a different scene inside the humble tent of al-tawasol dubai. nevertheless, the semangat stays the same. the boys from the older batches have stories to inspire, the young ones have curiousity to be quenched.

they conquered the largest tent in the restaurant, the one adjacent to the makan place for males. a long line of mandy ayam and mandy kambing were devoured amidst chats, laughs and reminiscing. most of them proudly wore the 'quad colors' shirts bearing the koleq logo, including mr. khairul. and khaleef! 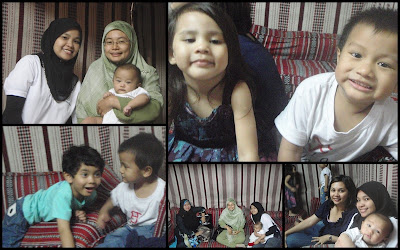 khaleef hitting it off with jasmin and bro emir
while the boys had their fun, the wives took the time to get to know each other. making new friends is always interesting. i met erin, jasmin and emir's mom. zahirah just came to dubai for four days of conference with husband in tow and left just this evening. later on kak muna came and joined in.

one of our many topics fall on comparing our hubbies - who is the more obsessed koleq boy? 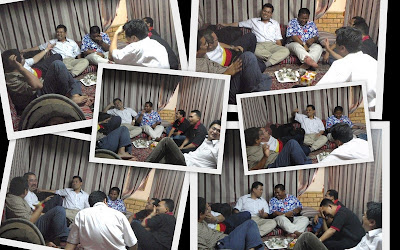 gelak session
the boys had finished eating, but the reminiscing had just started. this time over tea. the conversation was so intense that a pak arab took a peek into our tent to see what the fuss was all about. by the end of the session, the waiter had to 'hint' a polite request for our entourage to leave the tent. 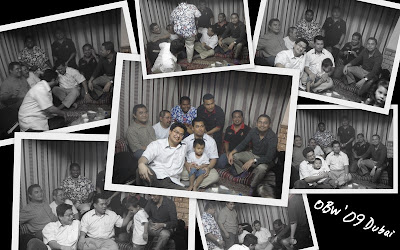 the first unofficial OBW held in the middle east, first of many more to come. many more were missed during this maiden get-together - like mr. khairul's classmate afza and senior musyil; but not forgotten. it was not a huge gathering, but it was certainly memorable.

mr. khairul would like to extend his high appreciation to those who made it:

"..Spice v76, Faisal Shon v84, Zaim v82, Nik Norishky v90, Nik Kamil v96, Noor Azizi v97 and Rizal v92. To those who are residing in GCC, please contact me via my FB. The boys are updating the database for MCOBA Secretariat HQ." 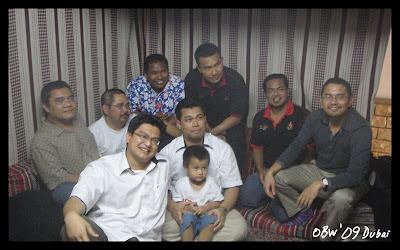 here's to the next OBW in UAE.

Had a great time with everyone. Thanks Khairul for organizing this OBW. Hope to see you guys again soon. :)

kak...some correction Faisal Shon from batch Kingtho' of 84 and Nik Norishky from my batch form V '90 :-)

azizi, he had fun..and really appreciate those who attended. :)