Bohemia Crystal From Him!

mr. khairul can't keep a surprise. especially from his wife.

since in libya he was excited to tell me about his anniversary present to me, and yet wanting it to be a surprise. (that's why he sucks at keeping a surprise. nak surprise orang tapi tak sabar pulak nak bagitau hihi!) when he told me it's 'something he wouldn't buy in a million years', my guesses range from kinky lingerie to persian carpets to pearls on a ring!

and then i think it's probably one of those fancy english tea-cups with little roses on them.

he said i was getting warmer. 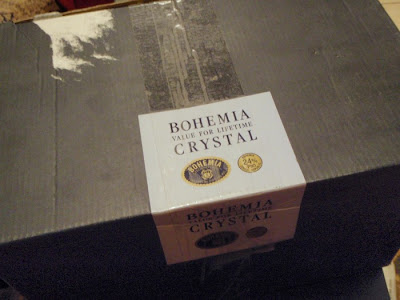 when he came back, i saw this. bohemia crystal. happy anniversary. open it! 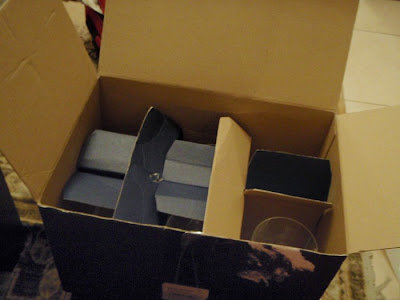 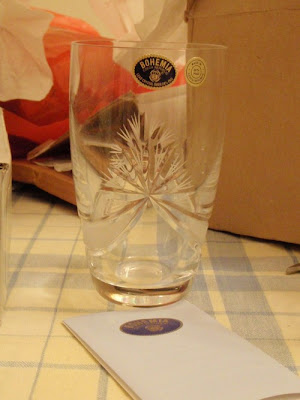 it's a set of heavy, 'carved-on' crystal glasses, from bohemia, czech. just like how batik is now synonymous to indonesia, and the best jade from hong kong; bohemia crystal is the pride of the czech republic.

bohemia was a part of the former czechoslovakia, now known as the czech republic, and was famous for its beautiful and colorful glass, with its excellent cut and engraving.

bohemia crystal is a decorative glass made in bohemia since the 13th century. oldest archaeology excavations of glass-making sites date to around 1250 and are located in the lusatian mountains of northern bohemia...the history of bohemian glass started with the abundant natural resources found in the countryside. 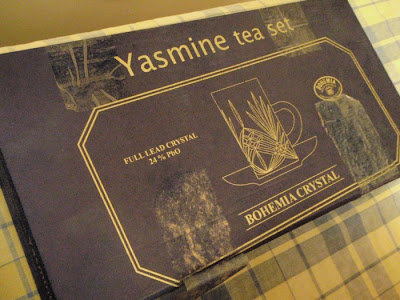 oh, but this was really a surprise - another box of bohemia crystal! 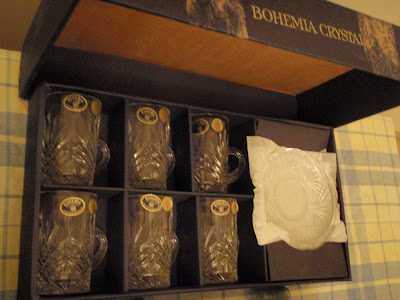 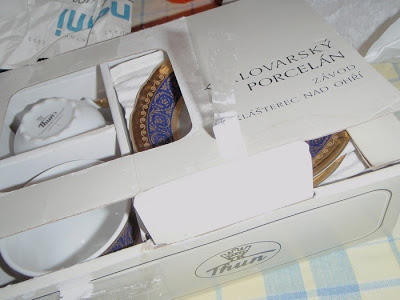 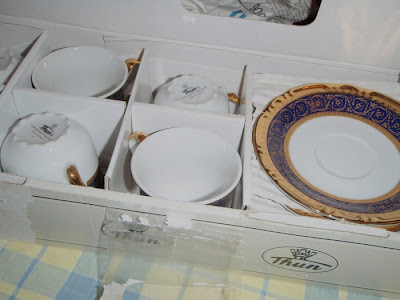 honey, i'm not like most women who collects victorian porcelain tea-cups or fancy crystal or shining silverwares - but this is a really special treat for an ordinary girl like me, who collects tisu papers and still keeps her 1999 x-files comic book in a plastic casing!

thank you for making me feel super-special! a really wonderful anniversary surprise!

did we have a fancy anniversary meal?

since i haven't had mandi rice since i started pantang - which is waaaaaay too long for a mandi-freak like me - i suggested simply going for a mandi lunch at - where else - our favorite mandi restaurant, al-tawasol.

i feel at ease here because since we're eating in an arabian 'tent', it's very easy for us to put kazim down on the sofa cushions, and for me to breastfeed him anytime. it's also comfy for khaleef and kahfi to roll around and provide just the perfect privacy for us as a family with young kids.

then mr. khairul thought about a fancy anniversary dinner - okay.

however, by 8pm all the THREE kay boys were out. K.O. zzz. kapoot. since it's easier to just let the boys sleep instead of going out for dinner, i cooked one of mr. khairul's favorite - mee goreng mamak, syigim style!

...and that was our anniversary celebration.

all our three babies khaleef, kahfi and kazim dozed off - sprawling on the comforter spread in front of the tv. mr. khairul in nothing but his bermudas. me in my pajamas. sitting opposite each other, enjoying a home-cooked meal. mee goreng mamak, with iced ribena. at home.

we both laughed at the simplicity of it all, and agreed it was just as good.

so sweet.. in life it's not the frills that matter.. the most simple and heartfelt of gestures are the ones which imprint in your heart :)

Happy 5th Anniversary!Dinner in peace is defitinely much more meaningful than a chaotic dinner in a fancy restaurant

5 years and many more, insyaAllah....

>> hidayah, i like your words, "..it's not the frills that matter.." ape2 hal pun pikir convenience, pikir money spent, and time jgk! ;)

>> hi selfrestrained! you COLLECT tissues too!!! 1st time jumpe someone as crazy as i am kumpul tisu! hey, lets start a club! ;)

Happy anniversary Syigim and happily ever after :P

thanks nad, for the wish :) byk2 hadiah tu psl cover mother's day & sempena give birth to his 3rd son! hihi..