there was one weekend when mr. khairul drove the whole family to al-ain zoo. his maklong, kahfi and myself stayed back. determined not to let the weekend go to waste, maklong and i took a stroll along JBR (jumeirah beach residence) 'the walk' which is just a stone's throw from my place.

hungry, and about lunch time, maklong treated me to a yummy lunch at paul cafe, one of the most crowded cafes i've ever seen. there's never a time where only one or two table occupied. even on weekdays, the place would be reasonably full, what more on weekends - packed, with a long line of people waiting to be seated!

with so many other cafes along 'the walk', people still go for paul cafe! ntah ape yang best! curious, we too joined the line and waited for our turn to be seated. 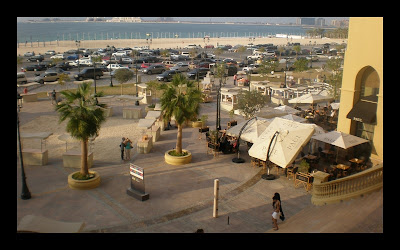 paul cafe @ the walk, from above
if you're looking for paul cafe at 'the walk', it's a corner place right below 'cone street gelato'. walking from the 'sheraton' end where KFC and the pizza place 'nepolitana' are, you wouldn't miss the sight of big cream-colored table umbrellas with the word PAUL in huge capital letters.

its color scheme spells simplicity and class - black and cream, with rattan seats and chequered flooring on the inside. 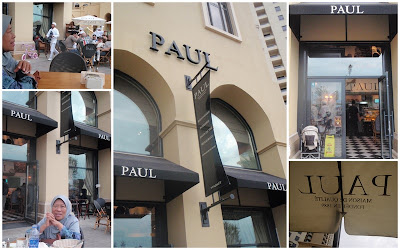 yay! with the nice cool weather, we opted for a seat outside, and got one strategically placed near the 'entrance' with an enjoyable view of the crowd passing by, and the sea breeze caressing our face as we lepak at this most sought after cafe - 'paul'. 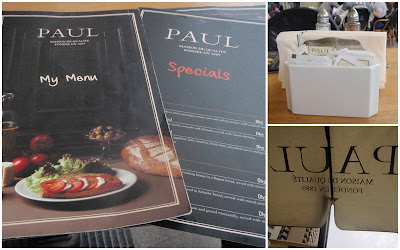 judging from the menu, i don't think it offers anything uniquely different from any other french cafes - the usual sandwiches, soups and italian food with fancy names that basically means either pizza, lasagna or pastas. other than that, it also has the chicken and fish fillet meal for the more hungry lot. 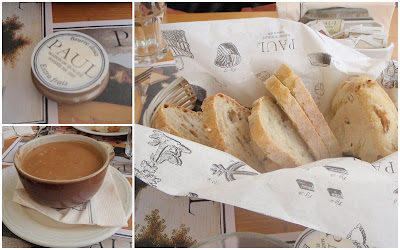 butter, the bowl of mushroom soup, and the basket of french bread
as starters we ordered a bowl of hot mushroom soup, made fresh from the paul kitchen. we ordered one, and asked for an empty bowl. seriously cukup for two. tak membazir, and jimat! hihi.

the soup was served with a basket of french bread - very soft flesh with very hard crust- perfect to be dipped or drowned in the mushroom soup (which, i must add - a bit salty!).

i was particularly fascinated with the cute little container they put the butter in. comel! 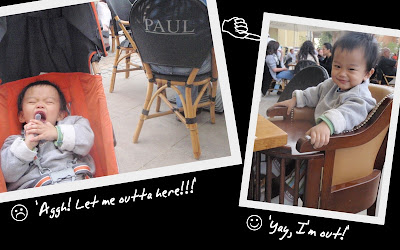 kahfi meragam at first, begging to be let out. now that he has mastered the art of walking, he sees no point in us making him stay put in his stroller!

so we took him out, and asked for a baby chair. paul cafe has the classiest baby chair i've seen! lawa gile baby chair dia! it looks very comfy, and certainly snug and safe.

i like baby chairs with very little space in between the back of the chair and the 'table' - because then the baby would really be confined between those space, with little room to wriggle and fall out from the high chair.

most importantly, kahfi did look like he enjoyed being seated that high up, and at the same eye level as the adults for a change! 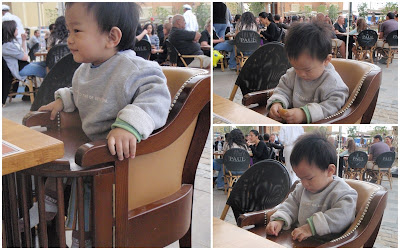 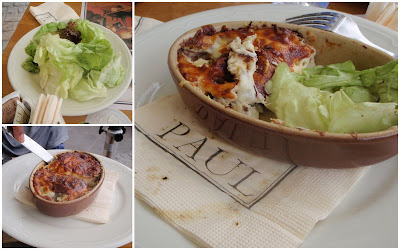 ah, our main course had arrived.

we waited reasonably long - well, long enough to realize that, "eh, lamanye?" our first 'carnage' was this chicken-potato-mushroom lasagna, served with a plate of supposedly 'fresh' salad, that doesn't look all that fresh. crispy, but could've been more fresh.

the lasagna was excellent though. the combo of chicken, potato and mushroom was just right, what more with the generous use of cheese. nyummy. 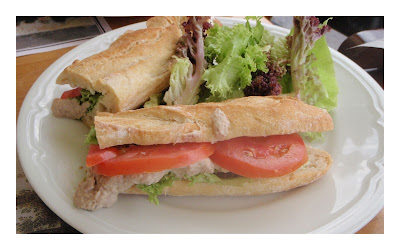 we also ordered this tuna sandwhich, made in french bread. it looks appealing and fresh, but we had to tapau. we were too full after finishing the delicious lasagna. further more we had already started on the equally filling mushroom soup.

it was a great lunch indeed. 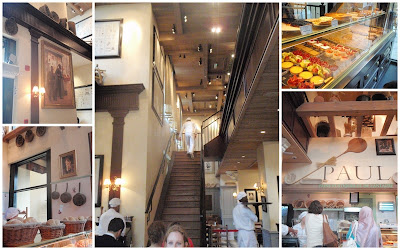 before leaving, i went in to check out the dessert they have on display at the counter. typical french pastries and an assortment of cakes all laid out pretty and nice, to entice the tastebuds.

inside paul cafe was made to look like a french kitchen - with pots and pans hanging over the walls, flour and herbs to make bread lined the cupboard behind the counter. breads are placed in baskets on the shelves, and the waiters and waitresses wore white chef-like garb to complete the picture.

* * *
ah, oui - this is one authentic looking french cafe, but with the a-little-too-salty mushroom soup, the less-fresh salad and usual fare in its menu - i think people crowd the place for its already famous name.

paul cafe. wanna know what's all the fuss about, try it!