i don't like fun-fairs. because i never won anything! haha.

i mean, you go pasar malam, and you know you're gonna spend a LOT of money but you know you're getting satay, jagung bakar or nasi tomato. and if you walk into TGV, you know you're blowing your money on a relatively good 2hr movie of your choice, with popcorn on the side.

but fun-fairs? you know you're gonna be spending money, sometimes a LOT - on simple games you can even fashion at home on your own, with NO guarantee of any return! 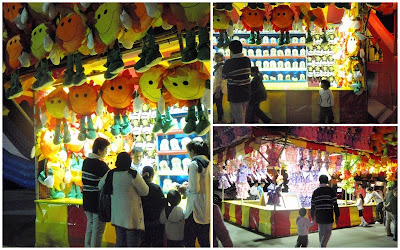 throw a baseball at the standing cats, make 3 fall down and you win a huge cute stuffed sunflower!
but there's a reason why it's called a FUN-fair - we came as family to simply have FUN! this fun-fair is just walking distance from our place, right by the beach, around the parking lot area of JBR (jumeirah beach residence). once you're at 'the walk', you won't miss the sight and sounds (and lights and screams!) from the games and rides.

you get a hard plastic credit-card-like card from the ticketing booth, which you can top-up at any time and then swipe at the stall when you want to play games of try a ride.

the games are all relatively simple - which is the attraction, i guess - because everybody's thinking, "hey, i can do that!" but it's not as simple as you think it'll be! it all boils down to luck, knowing a few tricks of the fun-fair games help too! oh, and not to get discouraged! 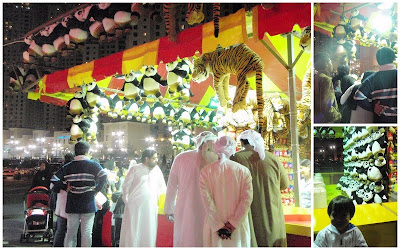 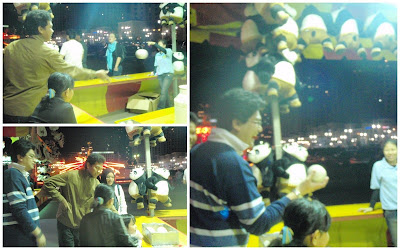 really thought we could win po!
haha. we had fun on this one. throw 3 baseballs into a can with narrow opening, and win a kungfu panda's stuffed po! and participants have 4 tries!

sofia started the ball-throwing and got nowhere! then it was asrar's turn - he almost got it in - but it bounced back! then mr. khairul thought he'd get a chance at the 3rd ball - siap kitorang suma agak-agak what's the best trick to get the ball in - "baling atas kot... kena baling slow-slow kot... kena baling kat can yang paling jauh tu kot..."

mr. khairul got ready and throw! and tak kena! haha. then i took the last ball and throw - mine was like asrar - nearly got in, but it bounced!

aww! but we had a good laugh! 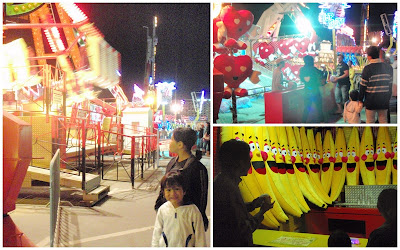 fun-fairs are not just about the games - but many thrilling rides as well! from rollercoasters to ferris wheel, and death-defying up-in-the-air rides, which i will never try - and khaleef can just dream! mak will let you ride when you're 40!

so the only seemingly 'safe' ride/game was the bumper cars. so off the kiddos went to have a kick at banging other people's car! 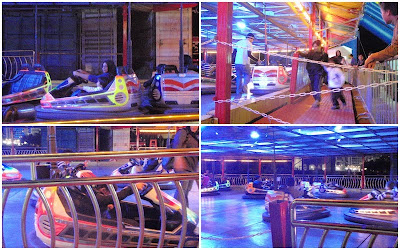 khaleef sat with tina, while sofia took the ride with asrar. khaleef had a fantastic time giggling everytime his car bumped into someone else's.

urm, a little confession - i've NEVER been on a bumper car. i was never interested, i guess. looks like khaleef tried it first before me!

I too hate fun fair! Never won anything! Even lucky draw pun x lucky jugak. :P Tapi Pak arab kat sini klu pegi Global Village spends up to 500 dirhams just to win something at the game. Me..? Spend the money on movies or the kids is much worth it kot?