just wanna tell you about my kiddos. khaleef and kahfi are sporting specially made t-shirts from saudi, bought when mr. khairul was there last year. 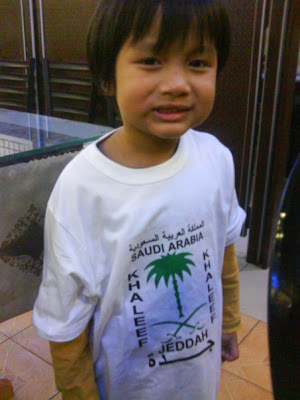 scene I
khaleef : mak, what's that? (the tone is like testing me, rather than questioning or wondering)
me : lion.
khaleef : no.
me : lion lah.
khaleef : it's a mommy lion. (because the stuffed animal is without its mane - oh ye lah! memang singa betina la tu!) 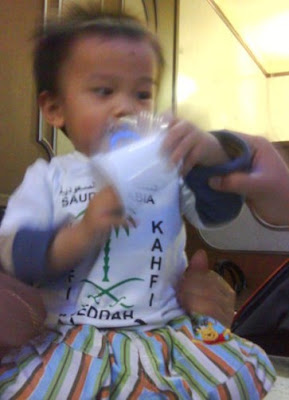 kahfi can
...say "bye bye" - and wave!
...say 'eih?' while making a phone action, puting his palm up his ear!
...main kejar-kejar with his abang!
...run away when he took something (like remote control), and when cornered, he would smile cheekily, and actually hand over the item he took, without fuss!
...eat mandi rice!

kids like to be cheeky and they can get away with that. hehe

but adorable boys la Syigim, i kena amik tempias your boys if I want to get pregnant again..

>> fairus dont get me started on all d wrestling matches yg i kena stopkan! ;)