a must-visit for all malaysians visiting their relatives in dubai during this cozy winter - the palm jumeirah island, the biggest man-made island in the world, created by using land reclamation (creating new islands from the sea - landfill).

construction of the immense island started in 2001, and the first handover of residential villas began in 2006.

the palm shape of palm jumeirah island
*the palm jumeirah island is in the shape of a palm tree, as you can see from the picture above. it consists of a trunk, (in the middle) a crown with 16 fronds (cabang-cabang kat kiri kanan tu, where the villas with beach-front are, yang org kata david beckham and shah rukh khan ade sebijik villa kat situ).

the 'crown' with 16 fronds - cabang-cabang - with residential villas yang ade private beach at the front
there's also a surrounding crescent island (yang bentuk bulan sabit besa keliling cabang-cabang tu) that forms an 11 kilometre long breakwater (structures constructed on coasts as part of defence and to protect against harsh waves and hakisan - kat keliling bulan sabit tu they put a lot of hard big rocks piled up to create the 'breakwater').

the crescent is connected to the top of the palm by a subsea tunnel - so kita drive underwater! kalo lalu dalam terowong tu saspen je... terbayang kalau tertebuk... adoi!

the 'crescent' part of the island, yang bentuk macam bulan sabit - during construction
how did they built this huge man-made island? even the 'national geographic channel' titled a documentary as 'impossible island' when doing a feature on it!

as mentioned above, they use 'land reclamation' to create the island, but what is the exact process? even i cannot imagine the magnanimous planning involved in making the island -

a dredging ship shooting sand, to make the palm jumeirah island
from what i read, they use a technique called 'rainbowing', where a dredging ship (as pictured above) sprays sand that has been 'claimed' from the ocean floor, onto the surface of the rising island.

basically the ship korek sand from the ocean floor, and shoots the sand on top of the part of the island yang diorang nak buat tu. gile tak!

it's called 'rainbowing' because the process of shooting tu create an arch that resembles a brown-colored rainbow!

amazing! click on all the pictures for clearer shots! 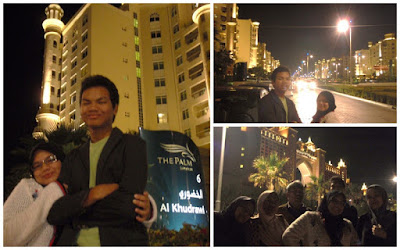 mr. khairul's sis tina and baby brother asrar
when my wombat sisters were in dubai last month, we took them here so naturally, we also took the whole family to atlantis on the crescent, one of the posh hotels on the island, where our ex-pm paklah stayed at its presidential suite.

for mr. khairul's mom, it's her second visit here when she came with mr. khairul's sis teh to help me during my confinement with kahfi. read about their trip, and the atlantis story from my point of view here! 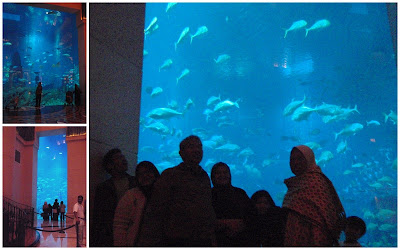 and of course, we went straight to khaleef's favorite spot in atlantis - the aquarium. with mr. khairul's youngest sister sofia in tow, khaleef was even more excited!

there was one time when mr. khairul and i took the boys for jalan-jalan in atlantis (khaleef is NEVER tired of seeing the sea-creatures in the huge aquarium!) we were lucky to catch the process of 'cleaning' the aquarium! wanna see how it's done? click here! 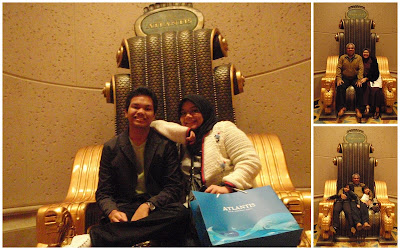 before going home, they goofed around at the 'atlantis throne', another must-take shot when visiting the atlantis.

since we went at night, after mr. khairul came back from work, the shots didn't do justice to the magnificient atlantis - so we'd probably be coming here again soon, in the daytime!

hope they enjoyed themselves. :)