took these shots when i took the boys out for football, bike time and walkabout on new year's eve, around the vicinity of our apartment. that very night khaleef had high fever! sian anak mak. maybe i took for granted the cool winter wind and didn't 'cover' them up properly. 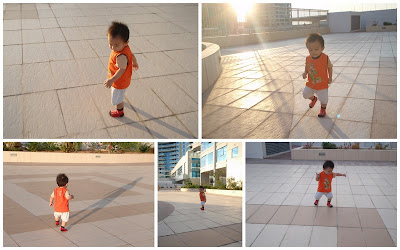 nways, the good thing is, khaleef recovered the very next day, while kahfi only has slight flu at the time of writing. they had fun that day, most of all kahfi who for the rarest time got to strut his stuff and do his thang - now that he's already walking very very confidently!

kahfi had actually started walking way back when he was 10 months old, way faster than big bro, who only started walking after his first birthday - about 13 or 14 month. well, like any second child, they're lucky to have a role model, a motivation and a great urge to get up, stand up, move, walk and run like the elder child! 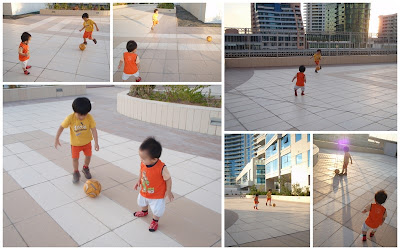 my one on one football match hihi
love these shots above. looked like the brothers were playing football together. haha. but kahfi still cannot run and kick, yah! camera trick je konon-konon kahfi tengah kejar bola dengan abang khaleef! 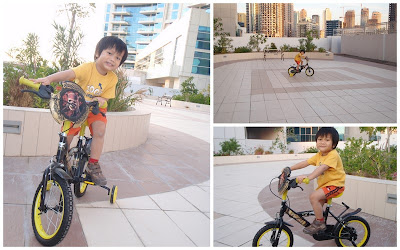 khaleef has a jack sparrow bike. yup. it's black and yellow, with a bell and a yellow water bottle too. also it's got a skull shield strap right in front of the bike. it actually comes with a plastic dagger and an eye-patch too tapi mane ntah ilang. it's really pirate-y!

he wants to cycle so much that when i buang sampah kat trash chute pun he'll hop on the bike and paddle up to the trash chute and back again to the front door. padehal trash chute tu brape langkah je!

after the tiring kick-and-chase ball time, kahfi had his milk on his stroller, while big bro continued the physical activity on his bike. 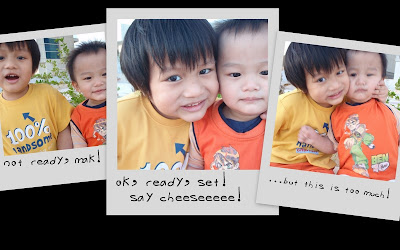 the evening grew more orange and bapak was coming back soon. so before heading home, i took a few shots of the brothers. 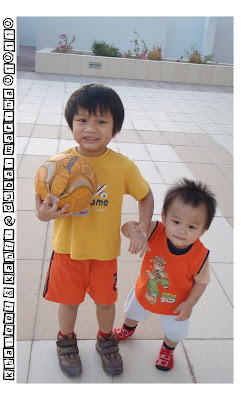 winter is getting rougher by the day, as much as i want to take the boys out again. well, maybe we go out one morning when it's kinda cool, but gradually warmed with the rising sun.

Bangga sungguh mak ye? Congrats, it calls for a celebration! Anyway, even though we felt warm Syigim, in my experience, memang tak boleh take for granted the cold wind. Macam ok, tapi end up kena flu or fever plak nanti. As long as there's a cold wind around until March, kena bungkus budak2 tu. Take care, good to hear that you're getting better. (and the kids too!) :) (*wink)

>> hmm spring over there must be fantastic ye nadiah.. esp for the kids nk golek2 kat luar.. :)