i guess it's going around now. and found us!

first, i started coughing around end of december, then subsided. on new year's eve, khaleef had high fever, recovered almost immediately the day after. 3 days later, kahfi experienced worse high fever, and went on and off for 3 days after that. few days ago, mr. khairul has started showing symptoms of blocked nose and sore throat. 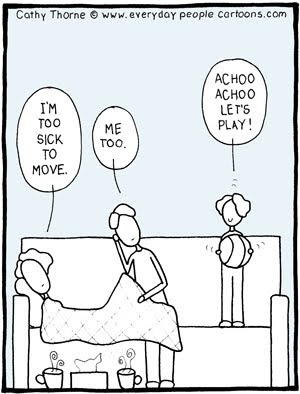 at the time of writing :

...so pardon the lack of postings for the past days! thanks to my honey cookiedough for mixing his special yemen honey drink for my blocked nose. helped quite a bit!

take good care of yourselves, abah, sisters and kawan-kawan!

Thanks Allah, we passed that. It's a hell of a month. Get well fast, and take care.

Salam dear... i was wondering what happened to you. Take care ye and get well soon!

take care and get well soon.

>> i hate being this silent, aisha but was feverish last couple o days! :(

“Wow” you are a genius for sure what great ways to get ranked high and obtain good traffic flow from your article. Thank you for sharing your information it was very good reading for sure. I am looking forward to any more of your articles you produce in the near future.
part time money