Back to the Past @ Dubai Museum

i actually love going to museums. i remember hating history subject back in school, but history that's represented in museum has an entirely different effect. the display, the manequins 'role-playing' historical events, the *dioramas, the short descriptions at each - it's digestable, educational and very entertaining.

* diorama refers to a three-dimensional full-size or miniature model, or a replica typically showing historical events, sometimes enclosed in a glass showcase for a museum ~wikipedia

after more than a year of staying in dubai, only now we had the thought of visiting dubai museum. we've passed it many, many times on our way to our weekend lunch escapades in bur dubai, but today was the day mr. khairul decided it was time to get in touch with dubai's history. 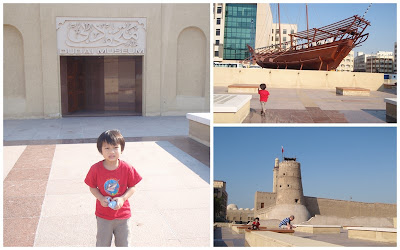 outside of dubai museum, which was actually a very old fort
interesting enough, dubai's priceless documented history is on display at the oldest existing building in dubai, the al fahidi fort, built to to defend dubai creek in 1787. so it's not just some new building built to become a museum - it's an actual fort, turned into a house of history in 1971. 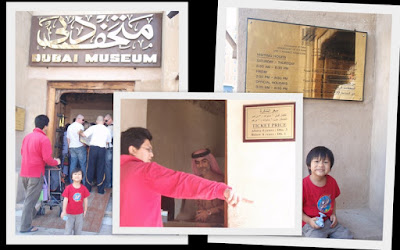 berape ye bayaran masuk ke muzium negara? here, we only paid 3dhs (rm3) for each of us, and 1dhs for khaleef! gile murah! 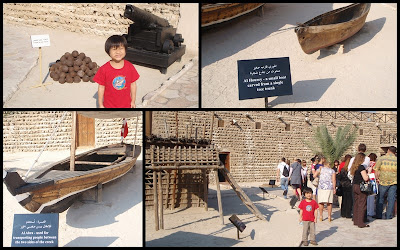 after the entrance
the fort is said to be built using corals and shells taken from sea, and held together by lime! amazing! i had to touch the walls to believe it!

upon entering, we immediately found ourselves at a roofless clearing, with some sampan displays and what looked like a hut. the bigger 'sampan' is actually al-abra, a transportation used to cross dubai creek, and still used till today!

* * *
the majority of displays were placed underneath the fort-museum. and spiral walkway took us to a dimmed-lighted hallway that led us to some of the most eeriely life-like yet fascinating diorama i've ever seen! 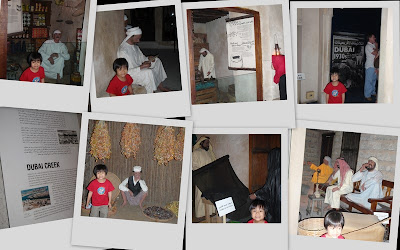 life before oil
like most museums, it aims to present the traditional way of life of its country, and in this sense; life in the emirate of dubai. dioramas with life-size figure depicts the everyday life and trade before the discovery of oil. statues selling cloths, herbs and spices, dates and jewelleries.

there are also statues sitting around smoking shisha, and a display of a mengaji scene, showing the domestic life of the locals.

it's really life-like, not because they're so good at crafting the mannequins - but the dim lights hid any imperfection, thus gave the illusion of life-like when looking at the mannequins! agak scary pulak! hihi suddenly the movie 'night at the museum' comes to mind... 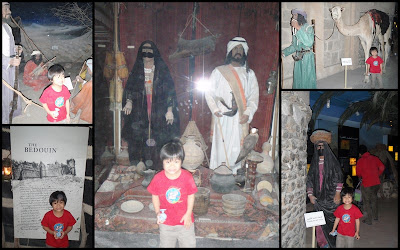 beduoin society
beduoin society is pretty much part of dubai history. it's a tribe that moves from one place to another, rearing sheep and lives in tents. they live simple, and their possessions are not much, enabling them to move easily.

if you notice, the lady-mannequins wore black-color cardboard-like 'mask' on their faces. this is a traditional veil called 'batoola', worn mostly by makcik-makcik and opah-opah arab, especially in the village.

the first time i saw a makcik arab wearing it, i was quite taken aback. it was fascinating because i've never seen one. it's said that this is a dying cultural practice, and still uphold by those traditional beduoin people. 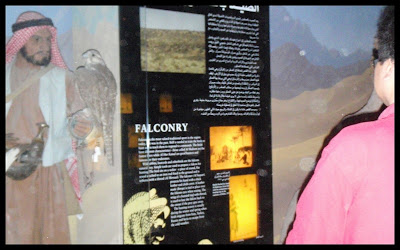 falconry is the world's most ancient sports, practiced in dubai since the turn of time as part of the desert life. arab kings in the olden days trained and hunted the falcon. even the arab poets composed poems about falcons and the activities of falconry. the beduoins hunted them for meat.

nowadays, falconry is practiced purely for sports, basking in the grace and beauty of the mighty falcon in flight. they're hunted or trapped, then tamed and trained. it's strictly controlled under the emirates law, to protect the birds. 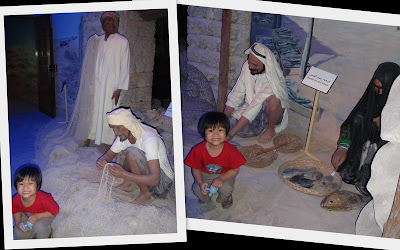 pearl diving
this is said to be the most interesting displays in the museum - the pearl diving. for thousands of years, the locals of dubai emirates were involved in pearl diving. it was one way to make a living. in early 20th century at dubai creek there were over 300 boats of nearly 7000 pearl divers! 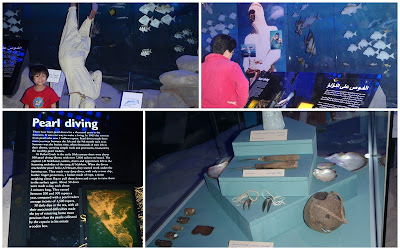 they only wear nose clip, leather finger protectors (bulat-bulat kecik-kecik muat sarung kat kuku je), a basket made of rope, a 5kg stone to weigh them down, and a rope to pull them back up.

that's all! and they usually dive in for a good 3 minutes, 50 times a day! 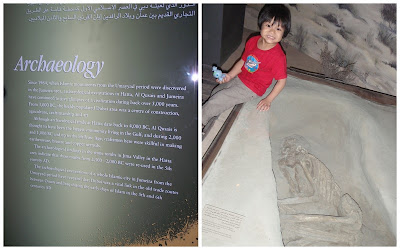 archeology
what surprised me later on, was that dubai also has archeological sites! there's even one in jumeirah, with traces of a complete city, occupied during the umayyad period (7th -8th century?)!

also on display, are artefacts from several excavations in the emirate, recovered from graves that date back to the third millennium BC. skeletons in various positions, buried together with their clay pots and bowls, and a few with arrow heads.

death by bow and arrows? 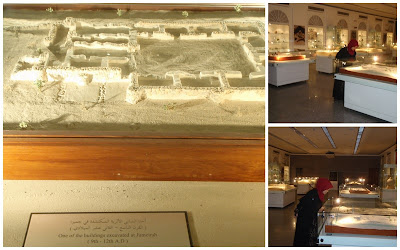 i was hoping to get a 'dubai museum' fridge magnet, though! 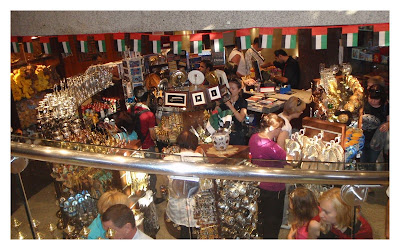 the gift shop at the end of the line
after the brief history of dubai, i felt a little enriched of the cultural history, and the life in dubai before oil. with the cheap entrance fee, we'd definitely be bringing mr. khairul's family here, to experience dubai of the past.

Me too. love going to museums.