it's movie time with syigim yet again! i really had fun with these movies - a satire war movie about hunting down nazis, a drama about an avenging smart sociopath, an adorable japanese anime, and a whodunit (or rather, 'where-is-he') comedy. 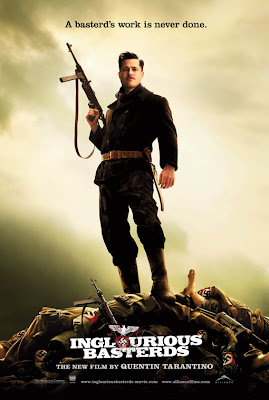 i prefer not to watch movies that worries and saddens me, and this include disaster movies, and war movies. however, 'inglourious basterds' is hard to ignore when you have quentin tarantino helming it, with the genius acting of brad pitt, and a couple of french and german talents!

the movie begins with this line "once upon a time, in nazi occupied france.." upon a black screen. and you know it's gonna be a little quirkier for a war movie. a small group of americans headed by capt aldo raine (brad pitt) call themselves 'the inglourious basterds' vow to kill any nazis they encounter.

it's weird - this movie seems to be in slow pace but it never has a dull moment, right from the first scene. suspens rule the screen each time! i can't keep my eyes off, especially with the determine capt aldo raine and the cunning colonel landa, the jew hunter in it. its dark comedy is smart, with just a 'dash' of violence - 'a dash' a la quentin tarantino, that is!

even when things seem to be normal and the characters speaking politely - you knew somehow, at any minute, something violent is going to take place.

brad pitt is really a character actor. with a frown in his eyebrow, and a crooked smirk, coupled with a smart-ass attitude, he brought capt aldo raine to life. i LOVE him! he's super sexy AND super talented! 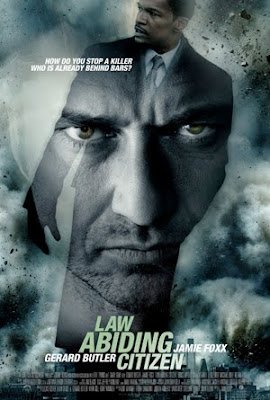 don't mess with a father's rage.

movies like 'taken' starring liam neeson, and 'death sentence' starring kevin bacon both share this message, and this third movie i watched shouts the same - 'law abiding citizen' starring cool jamie foxx and the oh, so sexy gerard butler (from 'p.s. i love you).

you dads out there, imagine if you witness your wife being raped and killed, and your little daughter dead too, while you're on the floor stabbed, helpless to do anything - how would you feel? you think that's worst? imagine if one of the two murderers walked free - just because of a flawed 'justice' system?

i didn't watch the macho gerard butler in 300, and in beowulf he was creepily animated, so the first and only time i watch gerard butler was in the sappy sweet 'p.s. i love you' in which he was this super-romantic guy, even after death! it was light, and it was sweet - so i was kind off sceptical knowing he's in this heavy drama. and yet, a good actor can thrive in any genre - and so was he in 'law abiding citizen'. his performance was believeable - sad, hopeless and helpless at the beginning, turned ruthless and conniving towards the end.

equally excellent performance from jamie foxx as the attorney involved in his case. a case of this avenging father who seemed to be organizing a highly-skilled killing spree on those involved in the trial that made his family's murderer got away - despite already being behind bars! how is it possible? 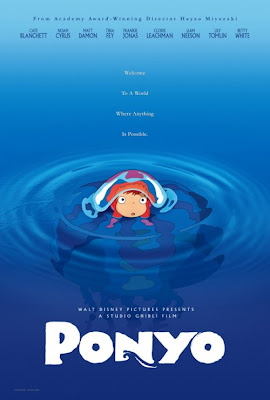 i think anime drawings are awesome, and some are downright bright-eye cute, but i'm just not a fan of anime. i'm more of a disney kid, and now a disney mom.

however, when disney brought 'ponyo' all the way from japan, i say it must be worth the watch. cate blanchett, liam neeson and matt damon all lent their voiced to the US version, but i'm glad to report that i watched the original version - completely in japanese, with english subtitles.

'ponyo' by world-renowned jap animation, hayao miyazaki is said to be adapted from the classic fairy-tale 'the little mermaid'. only in in this anime, 'ariel' is named 'ponyo', and she's not a sexy mermaid, but an adorable weird sting-ray like red sea-creature that's supposed to be a goldfish! she wants to be human, and befriended a 5-yr old boy who lives on the cliff by the sea.

their friendship is so adorable and amusing to watch. you know how japanese kid voices are adorably shrill and sounds excited most of the time - it's cute! i don't care much about the storyline itself, though - very magical, and jap-folksy. sorry, i tried but i'm still not into anime!

cute, but not my cup of tea. khaleef didn't even stay to watch till the end! 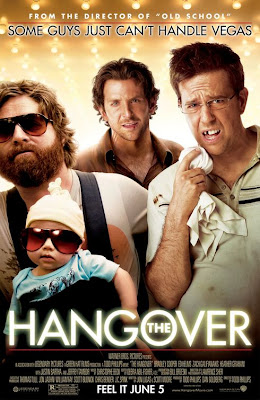 'hangover' just won the golden globes for best comedy, with mixed reactions. to me, it's not that great to win awards, but it is a heck of an entertaining ride.

one of the actors described the movie as 'saving private ryan, the comedy' - since the storyline revolves around four guys looking for their missing buddy who is also the future-groom, after spending a wild bachelor night in vegas - and they were probably too drunk the night before, that they had no idea what happened - they simply cannot remember what they did!

so it was interesting just to watch the 'mystery' unravels as the rest of the guys tried hard to re-trace their steps from last night's adventure, that probably lead them to find the missing groom, who's getting married the next day!

half of the casts are unknown to me, but they have great chemistry together, and it works out well for the comedy and provided laughter all around. if you want something fun and silly to pass the time, i suggest watching 'hangover'!

my Miya is a HUGE FAN of ponyo. watched it a million time over the last 1month (mama dia nak muntah dah tgk)..at age 20months almost hafal most of the lines & act. even while having her hot drink, she will berlakon "achi achi".

i love inglorious bastard (tp mmg kena tunggu budak tu tido, then i can watch it). ganas, but the dark comedy just hit the spot.

keep up being a good film critic!

~from a big fan of movies such as Taken, Death Sentence, Law Abiding Citizen..