when i was little, i remember dressing up like a doctor, buying those cheap plastic ‘medical equipment’ or ‘police equipment’ complete with a fake police badge, handcuffs, a gun and baton – just to pretend to be a police officer.

well, ‘KidZania’ allows kids to do that, and much, much more.

to me kidzania is basically like a theme park – there are no heart-thumping rides or arcade games; but a replica of a real city with real-looking streets, signage, buildings, shops and cafes – but for kids! here, kids can experience the working world, and get a sense of responsibilities.

yesterday, khaleef went there on a school trip with his classmates. i was very disappointed because i wanted to join him, watch him play and take photos, but noone to take care of kahfi and kazim since mr. khairul is in algeria.

here at kidzania, the kiddos can :

the ultimate heaven for day-dreamers, kids with imaginary friends and those who loves to play pretend!

‘KidZos’ is the accepted currency in this ‘city’, which the kids can use to buy ‘groceries’ or pay for pizza that they make on their own. i think this gives the kids a sense of value in the things they take for granted in life – well, usually daddy mummy pays for everything!

at kidzania, they not only have to watch what they spend, but they have to earn their money too! khaleef told me he had to build a wall by arranging ‘bricks’ – jadi bob the builder pulak khaleef! also he gets to ‘be’ a doctor for the day, checking up ‘patients’ at a clinic! 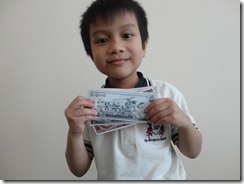 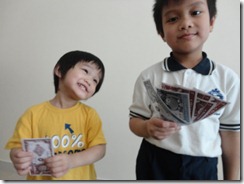 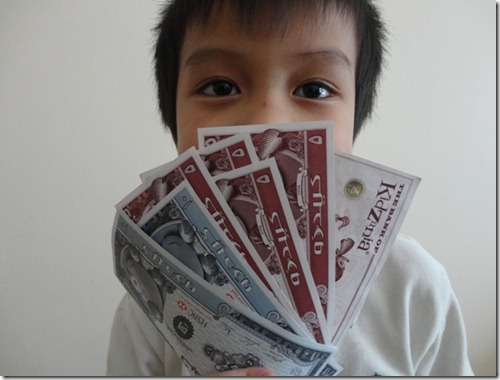 khaleef with his ‘hard-earned’ kidzos

interesting thing is, there are a few popular brands that are willing to be part of kidzania including the emirates airlines (kids can dress up like pilot, or cabin crew!), HSBC (you can see their logo clearly on the ‘kidzos’ money), ENOC (petrol station) and of course, mcdonalds! even the paint brand jotun has a ‘shop’ there, for kids to try painting walls and learn the right way to paint.

these are some of the many, many ‘jobs’ kids can participate in and learn a thing or two. (all image is from google) 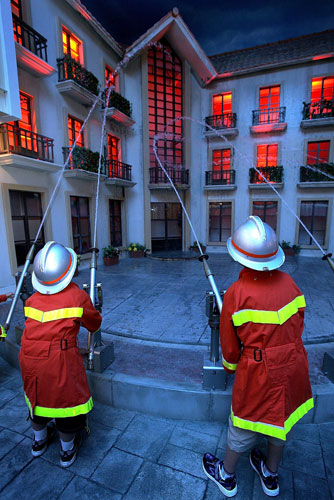 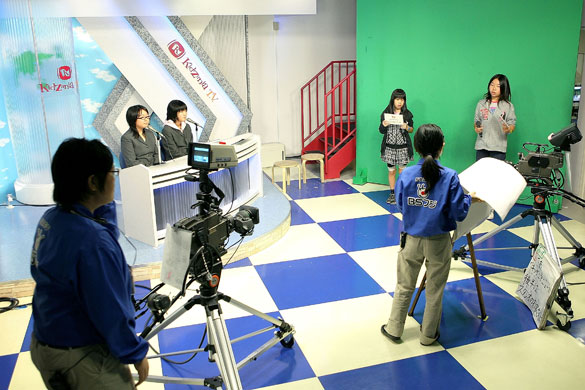 i really really wished i could have been there for the whole fun experience with khaleef. aku pulak yang over ye hihi. i wanna see him wearing surgeon scrubs. or a fire fighter uniform. i want to see him build houses and make pizza. i want to see him fly airplanes and fill up petrol at the petrol station!

that’s just downright daylight robbery lah! pay 90dhs JUST to watch, and cannot even join in with your kids. at least that 90 dhs should come with complimentary snacks if not a whole meal of lunch or dinner!

well, i complain and complain – but i bet when the time comes for me to finally get to join khaleef at kidzania, i’d pay the 90dhs too…

just wanna tell you guys, while googling for images, i saw a picture of our deputy PM in what look like an opening ceremony of a kidzania. i was surprised! kidzania already opened in malaysia? or opening soon? i googled further and found out that there will be (or is already?) at the curve. anyone boleh confirmkan?

anyway, i imagine a malaysianized kidzania in malaysia – maybe budak boleh jadi penebar roti canai and earn money. or visit a ‘pasar malam’ and spend their money on food, or dress up as police officers to foil a ragut attempt!

Kidzania Malaysia will be opening in December 2011 at the Curve, Damansara.. Entrance fees for children age 4 - 12 is only RM50.00

Auntie Gim! Kidzania Malaysia dh buka officially on 28 Feb 12. The size is quite standard worldwide (80K Sq) in Curve NX (6th & 7th floor), 90 jobs to choose (more than in Dubai) The price is cheaper than in Dubai (nasib baik, if not kesian Encik K because 3Ks kecik and mak 3Ks nak masuk sekali kan hehe). We took some pics from ur blog to be used in the class yek (pic Khaleef :P)

>> i would assume this is dora? ;) we would LOVE to go again to kidzania.. but cheap or not, i still don't agree that parents cannot be involved with the money they pay. at least free food! :)