caught this on tv today.

this tv program titled 'ambassador', was aired on channel dubaiONE. and surprise surprise! it was an interview with our very own malaysia ambassador to the uae, dato' yahaya abdul jabar.

a mesra-rakyat leader, i can see his warm personality when speaking about his childhood and education, at the same time his professionalism when talking about malaysia-uae economic relations. 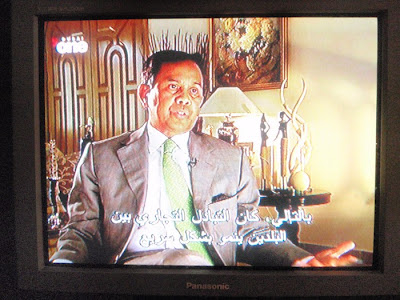 malaysia ambassador to the uae, dato' yahaya abdul jabar
he started of with a personal take on his life as a young boy growing up in penang and his college years. it showed him as an everyday man with carefree childhood and exciting student life (do-it-yourself toys and student demo against vietnam war during his UM days!)

then he moved on to describe his first arrival to uae, from his previous posting in south africa.

later the topic moved on to a more serious matter like trade relations between malaysia and the uae, timber promo, tourism and investment. he also applauded the many malaysian construction companies that became part of the many developments in the uae, including big projects in reem island abu dhabi and also across dubai.

here's a short clip i managed to take while the program was on air. i think it was taped in 2009 but i'm not sure whether they're only airing it now or whether it's a rerun. nways, enjoy the clip!