The Experiment, The Town & The Social Network

the seemingly harmless experiment that turned ugly; the town with the highest number of bank robberies in america, and the tale of the youngest billionaire in the world. 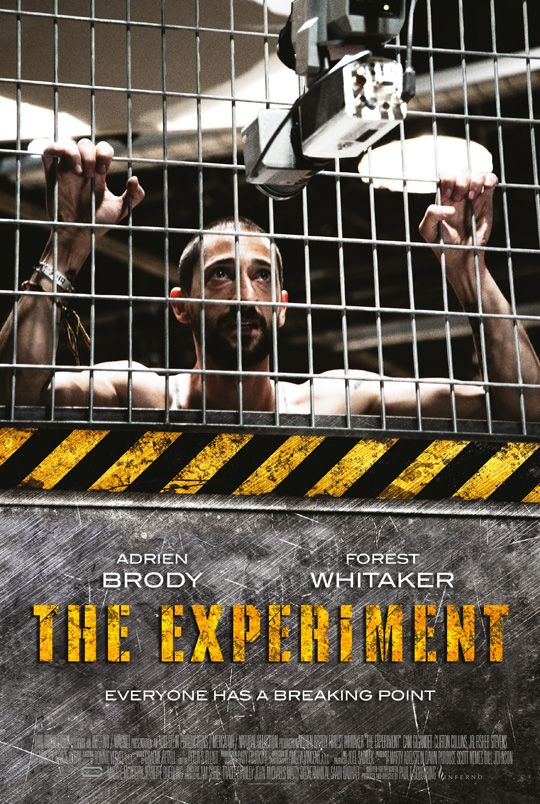 this disturbing movie is based on an actual experiment run by a professor to determine how normal people react to specific roles given to them based on the circumstances that they’re in.

so this group of people were told that they will be paid big bucks for participating. the catch? it must be for 2 straight weeks, they will be held in a remote location for that period, their rights may be violated at some point, and if they back-off before the experiment is completed – they won’t get paid.

agreeing to all terms, the men were taken to this warehouse which turned out to be a mock prison. they’re then separated into 2 groups – the prison guards; and the prisoners. it was all made to be real – the ‘guards’ were given uniform, set of rules that they MUST follow or else no payment, and armed with baton; while the ‘prisoners’ are given worn-out prison-clothes and locked in tiny cells.

at first they all laugh at this ‘acting’ that they have to do. but when one of the ‘prison guards’ got gila kuasa, things started to get really ugly. the ‘camera’ that is said to monitor their ‘performance’ to confirm payment didn’t help.

that’s when you see various human behaviours – different people reacts differently to this stressful situation they’re in. like in a real prison; there would be one guard who is not ruthless, and there would be one prisoner who stood up and retaliate to protect other prisoners. these normal men became so obsessed with their ‘role’ that they would do anything to ‘survive’ – beating up the man they befriended before the start of the experiment – just for this experiment that violates their rights as human.

it addresses the question : what would YOU do, given the same circumstances; be it as the ‘prison guard’, or the ‘prisoner’? who’s to say that you won’t succumb to the cliche of the roles given to you? if you’re told that you’re the ‘guard’, would you naturally be a disciplinarian? if ‘prisoner’, would you then naturally flow into being a trouble-maker?

very strong, intense performance by the leads – both academy award winners for best actors – adrien brody, and forest whitaker. a great watch, but for me, once is enough. the outcome of the experiment was very interesting; but much too disturbing for me to see it again.

ok, my bad. this movie is NOT based on a true story, but based on the fact that the ‘town’ which is ‘charlestown’ – really IS where bank robbers mostly are. during the premier of the movie, director and lead ben affleck did say; not everyone in charlestown is bad, and not all are bank robbers!

the plot? group of locals rob a bank with masks. but the pretty bank manager might know something, so ben affleck character must befriend her to find out more. ruggedly handsome recovering-bank robber falls for helpless damsel-bank manager. duuh. now he juggles conflict between pleasing his bank-robber-buddies by robbing another bank, his love for the pretty bank-manager who makes him want to reform, and in between, running away from the fbi agent out to get him and the gang.

the story itself is actually a bit hindustan – haha, meaning it’s a bit dramatized in terms of

though some plots are predictable, it’s a nice watch, and a nice heist movie. if you like a good heist movie with some sappy romance – this is for you. if not, baik tengok ‘the bank job’ lagi cool. sigh. it’s just that i forgot how oh-so-fine ben affleck’s abs are. grrr.

ok, i know lah basi already, and the billion people who has a facebook account have already seen this masterful tale of the youngest billionaire in the world. but here’s my review.

when i watched the movie :

after watching, i googled, and :

i like ‘the social network’. i’d watch it again. if you’re one of those rare people who hasn’t seen it AND you have a facebook account, shame on you. haha. go watch history in making!

Syigim, of course I ketinggalan bab-bab movies ni. but I do plan nak watch The Town coz seems like a good movie, something that I would enjoy. Plus, dpt good review esp when they say it's Mr Ben's best work yet.

ica, yes, the town got good reviews - in fact, ppl were surprised the movie wasn't nominated for best directing/movie.

hmm, me too la ica! so many (downloaded) movies, so little time!

my sentence would be.. 'Man.. lamanye x tengok blog SYIGIM!' hahaha.. by the way always love your review no matter what the movies are. I'll find the movie you reviewed. (biarpun dah basi, nak tgk jugak) :))

just find some little time to drop by ye! :)