its tagline is, “the easiest way to blog”.

like i told my husband (who is too lazy to write long-winded sentences like i do!), tumblr is perfect for him :

i have a tumblr account, and soon i’ll create one for him, just about what he sees on his travels. i’ve had this account since 2-3 years ago but recently i decided to tumblr actively after seeing the gorgeous pictures on my sister’s tumblr, favoritewaffle. they’re really good!

my tumblr is titled, “For My Sons”, created just for my 3 boys; khaleef, kahfi and kazim. it has my kata-kata hikmah for them, it has little stories of me, mr. khairul and the boys; and it has food pictures – with more coming up! 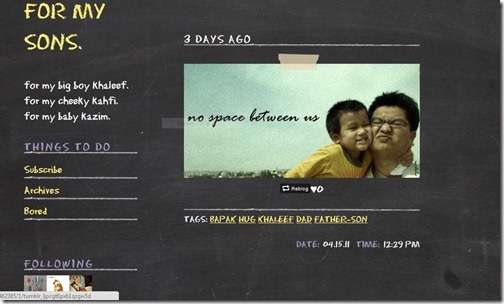 however, the one unique thing about tumblr is the ‘reblog’ button.

when you visit an interesting tumblr, and you see a picture you like, or some tips or short story – you can immediately press ‘reblog’, and that picture will automatically appear in YOUR OWN tumblr, with full credit and back link to the original owner.

and of course it works both ways. some random stranger visits YOUR tumblr. if they like your picture, they can freely press ‘reblog’ and you can proudly see YOUR picture on someone else’s tumblr, with full credit to you. and you will be notified in your dashboard.

best kan! it’s a nice feeling when you know that someone out there like what you put up, and sudi nak letakkan kat tumblr dia. hihi.

this is something new for me. I shall check it out later.