if you ever need a place filled with trees you can swing from, tight rope where you tread from trees to trees, buildings to climb, tower to jump from, dark rabbit hole to explore – ESCAPE to adventureland teluk bahang in penang.

and yes, you can be 4 or 34 years old and doing this. it’s like all the things you reminisce about doing when you were a kid – you can realize it here at ESCAPE adventureland teluk bahang, penang.

there is something similar to this in dubai, at the mall near oasis center I think – but it’s INSIDE a mall. at ESCAPE adventureland teluk bahang, you get to do it surrounded by trees and clear blue sky. 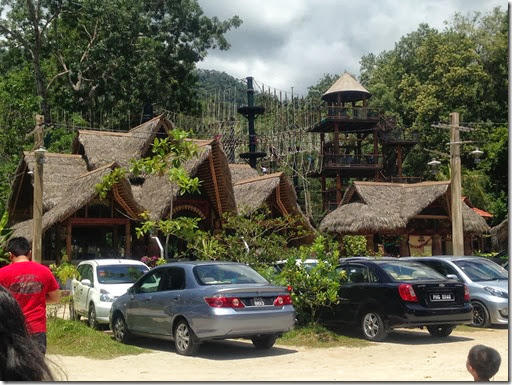 so we went last syawal, while back in malaysia. it’s surprising that penang boy mr. khairul didn’t know about this place until now. we were greeted with this pretty resort-like entrance and its signature grass-roof building. beyond it, we could see tall towers with tight rope and obstacles – and people treading carefully on them!

quite a sight. khaleef was excited just like his king-scout dad. me, not so much. haha. 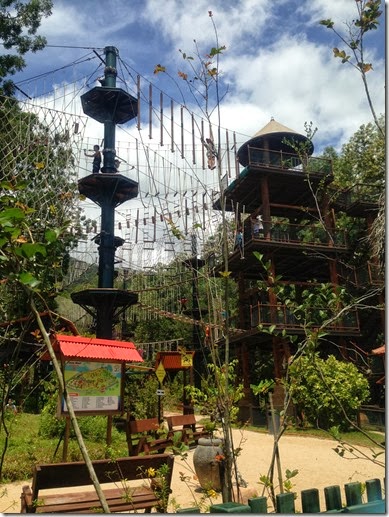 we can see people doing balancing act on the ‘monkey business’ where people walk through various obstacle course from pole to pole – with three levels of height! 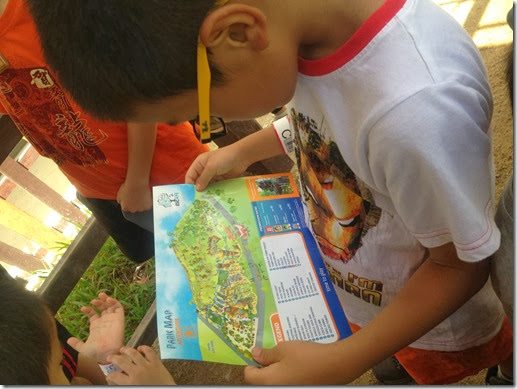 huge park - with so many monkeying around to do! you can see from the map how big the whole park is – even when you’re NOT climbing up or jumping down, you’d still sweat and burn fat as you walk around the whole park, enjoying the greeneries, fresh air and sight of people screaming haha. this is better than legoland! 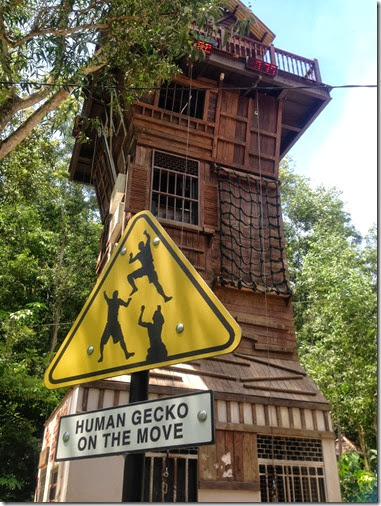 this is the ‘gecko tower’ – a wall-climbing made more interesting because instead of the usual colorful protruding rocks for people to hold on to as they climb, this one is built like a normal apartment. the trick is to use the bars on windows, the net, or the wooden planks on the wall, to propel you to climb further up. totally cool and creative way to spice things up. 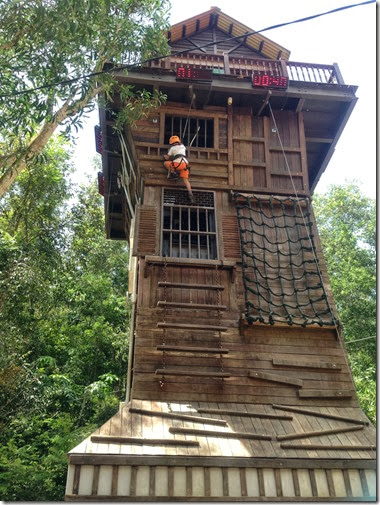 there’s khaleef in action! he can climb so fast! a natural! you notice that there is a clock right on top to time your climb, making it more challenging. 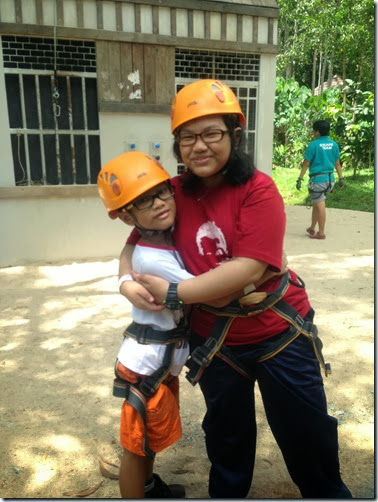 “we survived!” khaleef and his aunty ya (my youngest sis-in-law sofia) after a successful climb! you can see that they’re wearing safety harness and proper hard hat. after they climb together, khaleef took another turn with bapak pulak! sofia said it’s much, much harder than it looks! 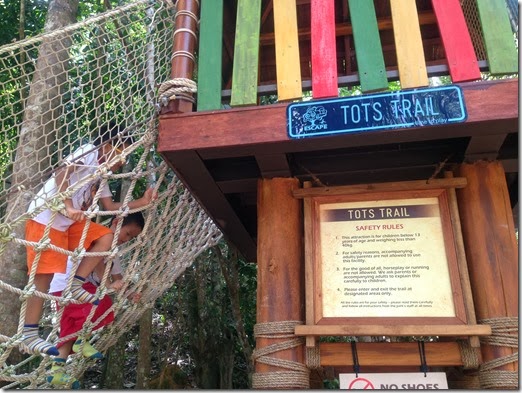 this is the ONE thing that can appeal to younger kids – the ‘tots trail’ where kids have fun climbing, crawling, balancing in this fun obstacle course. there’s a net, a circular tube to crawl into, a line of rubber tires – plus many other fun obstacles. big kids can try this one too, but for the younger kids like 5 yrs below like kazim, this is probably the ONLY thing that they can enjoy in this park. the rest of the activities are designed for older kids and adults. 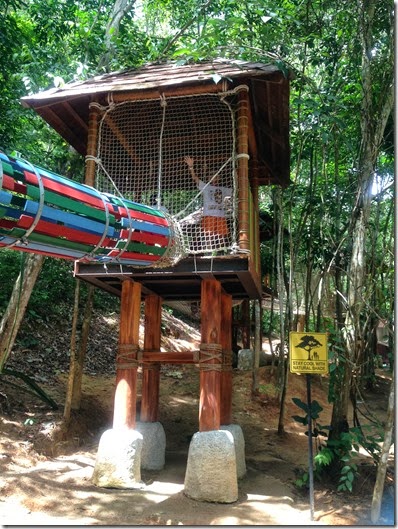 it’s TOTALLY fun even looking at them from below as they squeezed and treaded along the many different obstacle courses; pretending to be a soldier or a superhero escaping from villains. 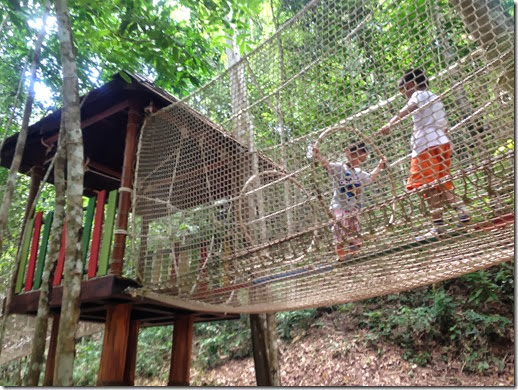 too bad I didn’t catch him on video, but kahfi was SO FAST! surprisingly so agile and fast-moving! their aunty ya sofia was gaining, while big bro khaleef had to slow down many times to help motivate the skeptical kazim. kazim had trouble trusting the ropes and nets, so a few times I had to stand right underneath them to ease kazim into walking pass it. 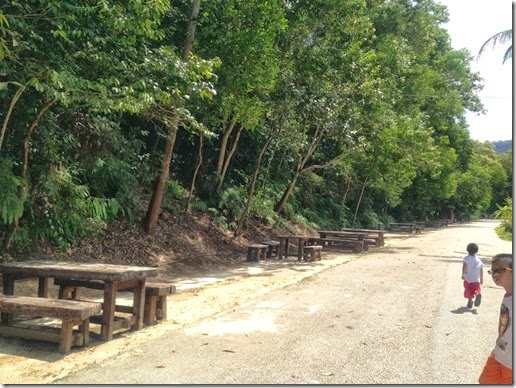 you can even have picnic here after working up a sweat in those fun activities. take a break and continue playing! speaking of taking a break, there are many stalls here selling food and drinks – no worries. 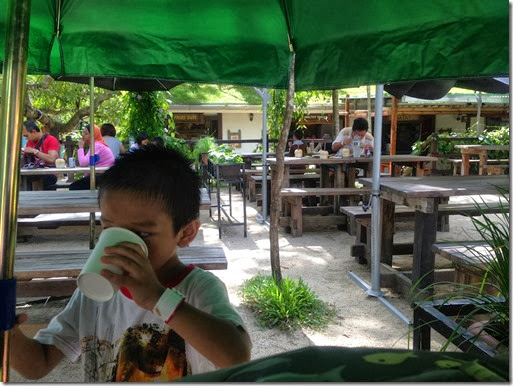 want to have money on you but not sure where to keep the coins and ringgit without them falling off as you swing from tree to tree? the park provide you with a CARD – just load the card with cash and then simply swipe whenever you buy stuff. so around the ESCAPE park you only need to carry that one card. 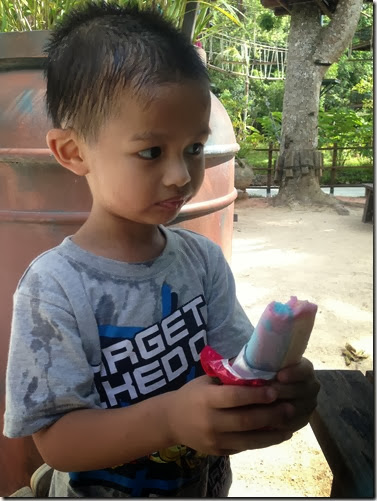 believe me, you need a whole lot of big mineral water bottles and tons of ice-cream after spending a day at the park! 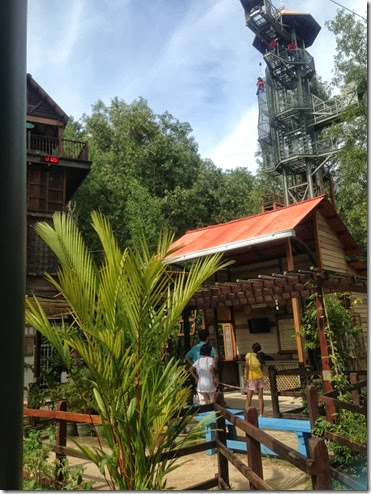 this is another dare-devil 'activity' called 'atan's leap' which is similar to bungee jumping. mr. khairul has done the actual bungee jumping while studying in the states so this was no biggie. what surprises me was that his little sister sofia tried that one too! that’s HER in the picture jumping off ‘atan’s leap’! I could never do it – bravo sofia! 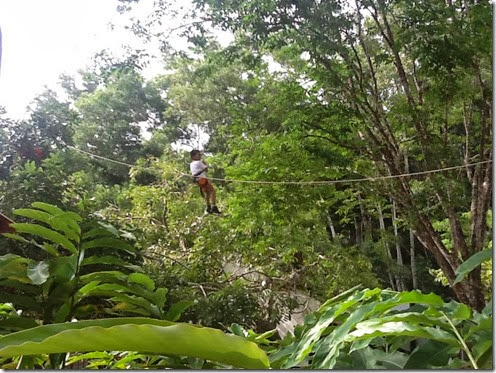 later on khaleef and his dad and aunt tried the 'flying lemur', and 'tarzan's rope' – similar to flying fox.

that’s my youngest sis-in-law swinging! look how far she is from the ground that you can’t even see it! 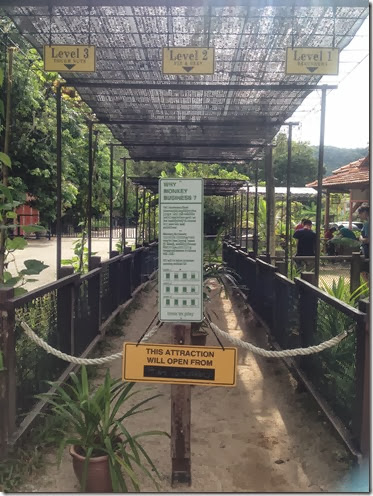 finally, khaleef and his bapak went for ‘monkey business’. mr. khairul said he should’ve done this earlier because this activity took a lot of time to complete. better get THIS over and done with first thing when you come here, ok! there are 3 levels – 3rd level is the highest! "suitable for monkeys of all ages," on their website haha. 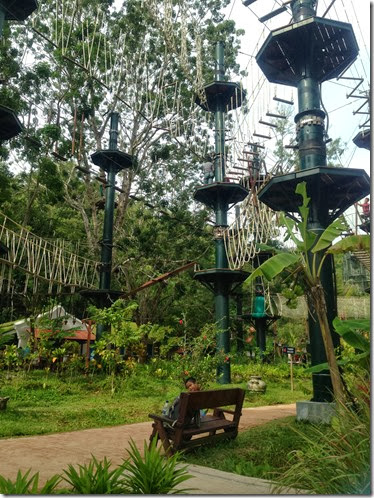 kahfi relaxing underneath all the obstacle courses. we can see them doing the ‘monkey business’ from below. 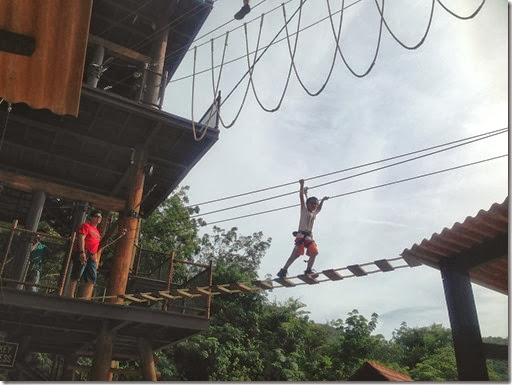 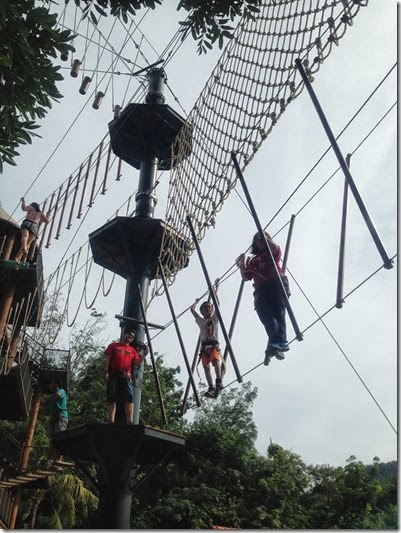 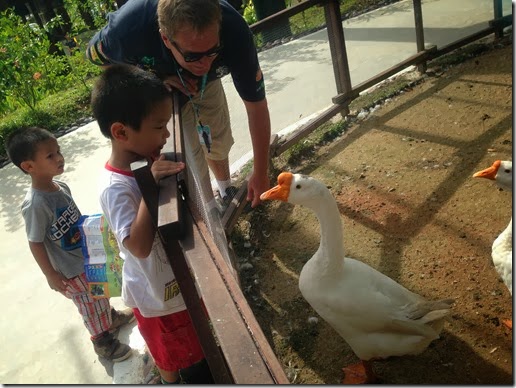 throughout the park there were also chickens running around freely, giving it a nice kampung feel. here’s kahfi at the geese enclousure. they were so close to him that he could touch them! 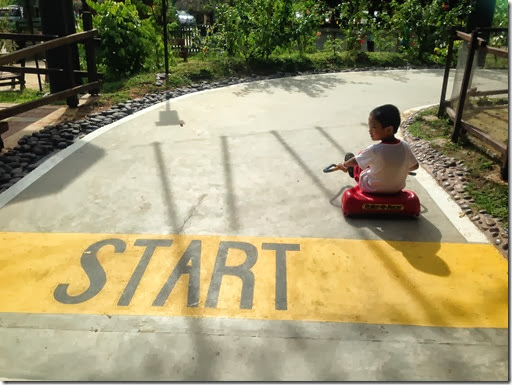 while waiting for bapak, anong khaleef and aunty ya to finish their ‘monkey business’, kahfi and kazim tried the 'zoom bug' – a human-powered go-kart.

nampak fun gile but kazim had difficult time maneuvering. kahfi was fast though. he got onto that thing and rode off as if he’d done this a million times. the 'zoom bug' is right underneath the 'monkey business' so while the younger brothers were racing, they could see (and wave) their dad, bro and aunt treading precariously from the ropes above! 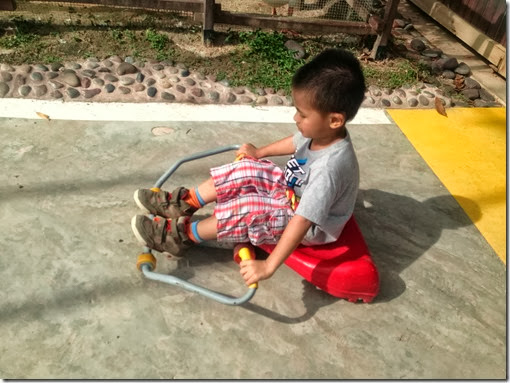 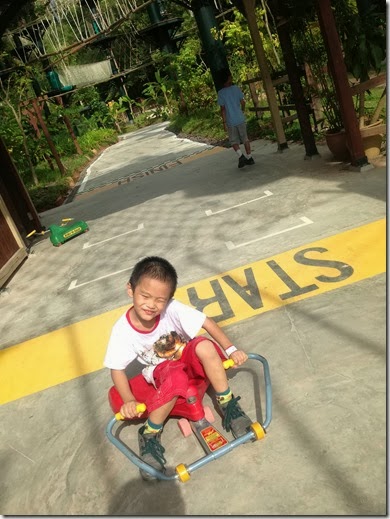 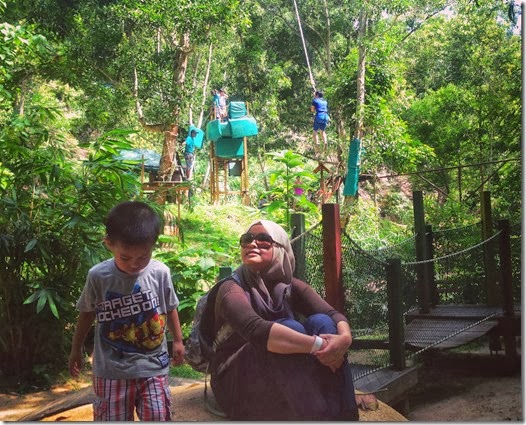 many thanks to the insightful mr. khairul, our boys got to sweat and play at ESCAPE Adventureplay at teluk bahang, penang. they got to swing from trees to trees, climb it, jump from it, walk on tight rope, go into 'caves' and scale the highest tower – all surrounded by nature.

there are a many more activities than the ones I put here. visit their official website ESCAPE adventureland for more information.

it’s a fantastic place to do a lot of physical activities, work up a sweat and get some healthy fun family time. definitely great for friends in huge groups too! 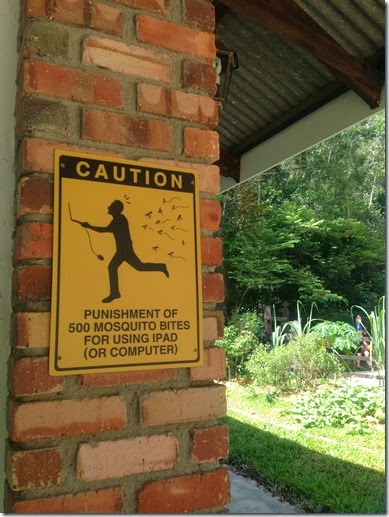 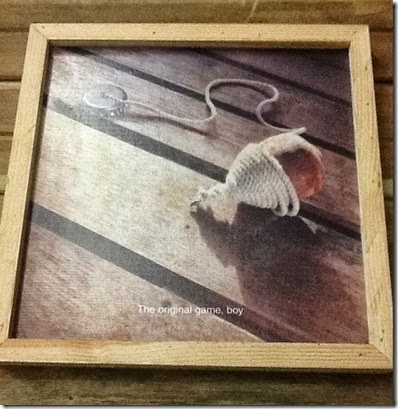 one of the posters found in its gift shop. coolness.

leave your stress at the office, leave your worrries by the sink, stop the traffic jam, switch off your phones – ESCAPE adventureland, at teluk bahang, penang. we’re already thinking of making this an annual event for our boys!