reviewing two comedies, a drama based on true events, and a cool sci-fi. ‘the internship’ is like a google job advertisement disguised as a comedy. ‘the way way back’ is a heartwarming story about finding your place in the world. ‘parkland’ is a true recount of the day US president john f. kennedy was assassinated. and ‘pacific rim’, an american sci-fi that looks suspiciously like those ultraman series I grew up watching…

‘the internship’ is like a big huge job advertisement for young techies interested in working in a fun, cool, colorful environment – the google office. in the middle of it all they throw in the story of 2 out-of-job middle-aged salesmen looking for a second chance to mend their career.

it’s the usual zero-to-hero, rise-to-glory story – unwanted, not fitting in with the other ‘cool’ google nerds, worse, don’t know squat about computer and its jargons. the two faces many obstacles that further confirms their inadequacy until they ‘come together’ through one successful assignment. this soon motivates them to finally conquer their flaws.

the story is very predictable but the setting is awesome (google office has a slide for its staff. a SLIDE.) and I am a fan of the wilson-vaughn combo since ‘the wedding crasher’. they have good chemistry, with different comic styles that work together.

an easy feel-good movie for fans who dream to be on the google team. keep that dream alive! 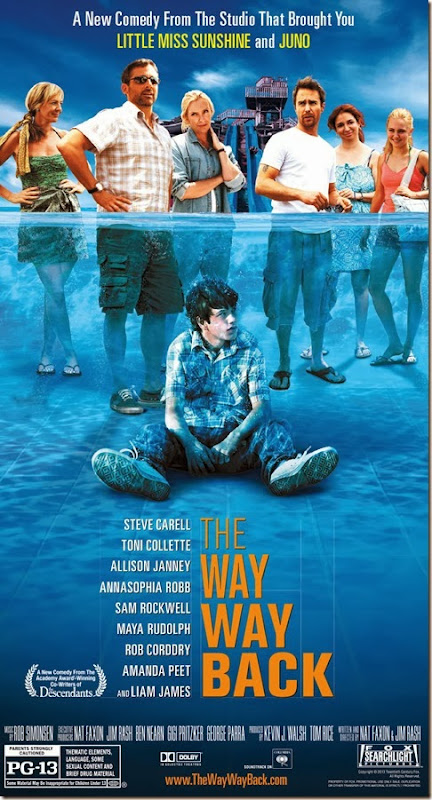 I love this movie. the movie poster says it all – sometimes you just feel like you’re – drowning in the crowd. but ‘the way way back’ tells us that no matter how awkward we feel, or how lost and lonely we are, there’s always a place where we can belong. a place of friendship among strangers, happiness in sorrow, and a sense of belonging when we feel abandoned.

14-year old duncan follows his mom & boyfriend to his beach house for summer. bummer. duncan started as aloof, disinterested and quiet, finally found his footing when he befriends the manager of a waterpark. and so begins days of fun and laughter with the merry bunch who works there, making him feel like part of a family; loved, and respected. this is in contrast of his mom’s boyfriend constantly intimidating him.

the cast is fantastic. my favorite is sam rockwell, so wonderful in ‘the way way back’ as the cool, likeable, funny manager of the waterpark. he steals every scene he’s in. I love to hate funnyman steve carell in this as he’s just such a jerk as the mom’s overbearing boyfriend. a mark of a talented actor. making an impact no matter what role he’s in.

liam james is convincing as the shy awkward teen. viewers grow with him in this journey – starting with his emotionless expression till his joyful smile. he’s one to watch.

a feel-good comedy that will get you cheering for the underdogs. highly recommended. ‘parkland’ refers to the hospital in dallas, texas – parkland hospital, where US president john f. kennedy was taken to shortly after he was shot by a sniper. the movie is an intense recollection of the day of the assassination, and the days that followed it. like a newscaster reported, it got ‘..very ugly, very fast.’

the movie starts with the final moment of the president’s life, and follows the nurses and doctors who attended to him at parkland hospital; the random citizen ‘zapruder’ who shot the famous recording of the exact moment the bullet hit the president on the head; the secret service, the law enforcement of texas; and the fbi agents supposedly to have received threats from the would-be assassin in a form of a letter.

all the actors involved gave very moving performance that left me in silent tears – especially the scene where they pronounced his death at the hospital. the sorrowful looks of doctors and nurses. staff waiting on the other side of the door. jackie kennedy’s blood-stained gloved hand. no words needed said. very emotional.

till this day, president kennedy’s assassination is subject to many conspiracy theories eventhough the ‘warren report’ had concluded that harvey lee oswald had acted alone in assassinating the president.

harvey lee oswald was shot dead by a random man 2 days after the assassination, (ironically was treated at parkland where president kennedy died) you can see the stark contrast of their funerals – one, a heartbroken nation mourning the loss of a fallen hero and another, a quiet farewell to an outcast, shunned by all including the surrounding churches.

a very well-made movie for people to experience that dark day for americans, and about the lives of people it affected. ‘pacific rim’ is a cool movie. to me, it may be the coolest, pointless movie I’ve ever seen. haha. it’s simply a movie about cool robots fighting raksasa made from unbelievably awesome CGI work. I wasn’t watching a movie. I was watching a 2-hour demo on how far human can stretch their CGI capabilities. the CGI was amazing, but that’s about it.

I mean tell me if this sounds familiar – huge 100-storey high monsters that look like mutated lizards called ‘kaiju’ (japanese for ‘strange beasts’. duuh.) kept terrorizing the city, so humans build their own ‘monsters’ in the form of equally huge robots called ‘jaegers’ to fight them. these huge ‘jaeger’ robots are operated by 2 pilots each, strapped in a special suit connected in the head of the ‘jaeger’.

it’s like the makers of the film thought – hey, how can we turn all those cheesy japanese ultraman series into one bad-ass cgi-heavy blockbuster? the result is – ‘pacific rim’. the concept of ‘super robot’ – robot with immense size equipped with incredible high-tech weaponry has long been introduced in the japanese manga and anime.

‘pacific rim’ took that idea, and turn it into a movie. watch it if you like robots. and raksasa. me? I actually skipped all the talking scenes, and just watched the endless jaw-dropping fight sequence between the kaiju (monster) and jaeger (human-operated robot), with that cool soundtrack on the background.

forget plot lines, forget character development, or clever script. there are only two reasons to watch this movie : the cool robots, and the cool soundtrack. please don’t make a sequel…